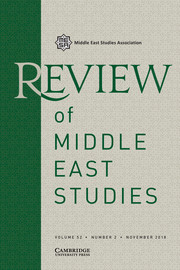 Special Focus: Reflections on the Geopolitics of Refugees and Displaced Persons

Film and Cinema Studies in Review