Cost of compliance with daily recommended values of micronutrients among a cohort of Spanish university graduates: the SUN (Seguimiento Universidad de Navarra) Study

Previous studies have shown that highly nutritious diets are more costly, but to date there has been no evaluation of the costs associated with failing to meet micronutrient recommendations in a Spanish population.

We examined whether daily food consumption costs (classified in quintiles) were associated with failing to meet at least three daily nutritional recommendations out of twenty (including fibre and nineteen micronutrients) in a cross-sectional analysis of baseline data of a cohort of 17 197 Spanish university graduates. Micronutrients and fibre intake were assessed with a validated 136-item FFQ. Average cost of food was calculated from official Spanish government data.

A balanced diet that includes enough essential micronutrients (vitamins and minerals) and fibre is critical for health promotion. To ascertain if a population is meeting such nutritional needs, culture-specific recommendations and objectives are used. The Spanish Society of Community Nutrition (SENC) and the Nutrition Unit of the WHO Regional Office for Europe have developed objectives based on specific Spanish cultural habits(Reference Serra-Majem and Aranceta1). When compliance with these objectives was assessed in a Spanish region (Catalonia), adherence was incomplete in many areas(Reference Serra-Majem, Ribas-Barba, Salvador, Serra, Castell, Cabezas and Plasencia2). The cost of food is an influencing factor on diet choice. Previous studies in a province of Catalonia have shown that healthier low-energy-density diets are both more costly(Reference Schroder, Marrugat and Covas3) and associated with a healthier lifestyle(Reference Schroder, Covas, Elosua, Mora and Marrugat4). In a French population, higher cost was associated with both low energy density and a better provision of nutrients, based on the French Recommended Dietary Allowances(Reference Andrieu, Darmon and Drewnowski5, Reference Maillot, Darmon, Vieux and Drewnowski6).

The subjects, methods for recruitment and collection of data from the participants of the prospective cohort study Seguimiento Universidad de Navarra (Follow-up Study of the University of Navarra; SUN) have been described in detail in a previous publication(Reference Segui-Gomez, Fuente, Vazquez, Irala and Martinez-Gonzalez7). Briefly, the recruitment of this dynamic cohort began in December 1999 and, as of the time of the present analysis performed in February 2008, it included 19 057 subjects with a mean age of 38·6 (sd 12·2) years, 60 % of whom were women. We excluded those with extreme values of energy intake (<3350 or >16 748 kJ/d (<800 or >4000 kcal/d) for men, <2094 or >14 655 kJ/d (<500 or >3500 kcal/d) for women)(Reference Willett8) (n 1700) to deal with under- and over-reporters and with biologically implausible values for height and weight (n 160), and 17 197 participants remained. These participants were analysed for the association between dietary energy cost and dietary quality, as defined by compliance with daily recommended values of essential micronutrients, taking the recommended daily intakes for folate, Ca, Na from table salt, iodine and dietary fibre according to the most current data proposed by SENC(Reference Serra-Majem and Aranceta1). For the remaining micronutrients, we obtained the recommended values published by SENC in its last available reference book(9) except for vitamin E, due to specifications for sex(Reference Varela10). We conducted sensitivity analyses taking the Estimated Average Requirement when available or the Adequate Intake, as proposed by the US National Academy of Sciences, as the recommended daily intake for individuals(11).

Participants completed a semi-quantitative FFQ that has been validated previously in Spain(Reference Martín-Moreno, Boyle and Gorgojo12). Calculations of nutrient intake were done using two of the most up-to-date food composition tables for Spain(Reference Mataix13, Reference Moreiras14). Micronutrients and fibre were adjusted for total energy intake through the residual method to provide a measure of micronutrient intake uncorrelated with total energy intake, thus isolating the variation in nutrient intake due only to the nutrient composition of the diet and not from the overall food consumption. This subsequently decreases the measurement error inherent in nutritional epidemiology assessment methods(Reference Willett and Stampfer15). Micronutrients examined were: Na, Zn, iodine, Se, folic acid, P, Mg, K, Fe, Ca, vitamins B12, B6, B3, B2, B1, A, C, D and E. Fibre was also examined.

The cost of daily food consumption was derived from the Ministry of Industry, Tourism and Commerce of Spain(16). The total daily cost of food (€/d) for each subject was calculated by multiplying the mean price of each food item per gram by the quantity in grams the subject indicated that he/she consumed in an average day and summing across all food items. To define dietary energy cost (€/4187 kJ; €/1000 kcal) we divided the total food consumption cost (€/d) by the total dietary energy intake (kJ/d) and multiplied by 4187. The participants were then divided into quintiles of dietary energy cost. 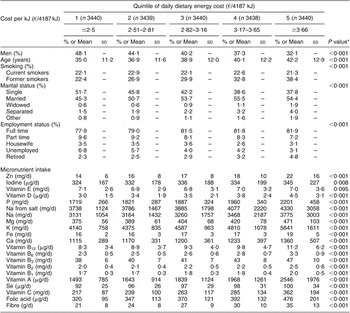 Continuous variables are expressed as means and standard deviations and categorical variables as percentages.

*The P value was calculated through ANOVA for continuous variables and Fisher’s exact test for categorical variables.

Using the North American daily micronutrient recommended intakes the results were similar especially for men. Among women the magnitude of the association was even higher (data not shown).

We ran sensitivity analyses without adjusting micronutrients for total energy intake through the residual method. The results were exactly the same for women but the magnitude of the estimates was slightly lower among men. However, the P for trend remained statistically significant (P < 0.001) and the comparison between extreme quintiles did not change substantially (first v. fifth quintile of dietary energy cost: PRR = 1·29 (95 % CI 1·24, 1·36); data not shown).

In a large cohort of Spanish university graduates, we have found that high dietary energy cost of daily food consumption is associated with a higher likelihood of meeting the recommendations for daily intake of micronutrients and fibre. Our results are consistent with previous research in this area that has shown similar results in other populations(Reference Maillot, Darmon, Vieux and Drewnowski6), as well as evidence that there is a higher cost associated with consuming diets of higher nutritional value in regard to micronutrients and energy density(Reference Schroder, Covas, Elosua, Mora and Marrugat4, Reference Maillot, Darmon, Vieux and Drewnowski6), even though this evidence was based on smaller sample sizes. We hypothesized that these results would be consistent in our population, and the association we have found (stronger among females) is important for further research and possibilities of policy changes or changes in clinical practice in Spain.

Limitations of our study include the inability to generalize the data to the general Spanish population because of the high educational level of the participants. While these participants may have a higher income than the less educated Spanish population to spend on food, the results are reasonably free of confounding by socio-economic status (SES) because the participants we examined all had a fairly similar SES. Although similar educational level does not guarantee similar income, educational level has proved to be influential in the evaluation of SES. Analyses that have taken account of education, occupation, income and employment status have shown that education is the strongest determinant of socio-economic differences in food habits(Reference Roos, Prättälä, Lahelma, Kleemola and Pietinen18) (i.e. restriction was used to control for SES as a confounding factor). Moreover, the very low percentage of participants meeting the recommendations that we observed was found among a relatively more affluent stratum of the population, and it is likely that the problem might in any case be worse among less well-off sectors.

An additional limitation is that our exposure variable was based on answers to FFQ, which present some degree of measurement error inherent in nutritional epidemiology. This withstanding, it is unlikely that the magnitude of the prevalence rate ratio that we have found here could be explained by the potential measurement errors, which are more likely to be non-differential.

The present results contribute to the importance of considering cost when initiating nutritional programmes, as some recommendations may be prohibitively expensive for some portions of the population. Clinicians also should consider the affordability of expensive food items on the part of their patients when counselling them on diet changes for micronutrient deficiencies, as it is possible that those who are not meeting recommendations may not have the economic resources to do so.

Cost of compliance with daily recommended values of micronutrients among a cohort of Spanish university graduates: the SUN (Seguimiento Universidad de Navarra) Study
×

Cost of compliance with daily recommended values of micronutrients among a cohort of Spanish university graduates: the SUN (Seguimiento Universidad de Navarra) Study
×

Cost of compliance with daily recommended values of micronutrients among a cohort of Spanish university graduates: the SUN (Seguimiento Universidad de Navarra) Study
×
×