Currently, there is an intense pursuit of pathognomonic markers and diagnostic (‘risk-based’) classifiers of psychiatric conditions. Commonly, the epidemiological prevalence of the condition is not factored into the development of these classifiers. By not adjusting for prevalence, classifiers overestimate the potential of their clinical utility. As valid predictive values have critical implications in public health and allocation of resources, development of clinical classifiers should account for the prevalence of psychiatric conditions in both general and high-risk populations. We suggest that classifiers are most likely to be useful when targeting enriched populations.

The last few years have witnessed a surge in the development of predictive classifiers to ascertain the probability of an individual to develop a particular mental health condition at some point in the future. These efforts are potentially important as they could make significant contributions to developing preventive approaches (Cannon et al. Reference Cannon, Yu, Addington, Bearden, Cadenhead and Cornblatt2016). While such classifiers have yet to be adopted generally in clinical practice, recent influential models, reporting high predictive values (from ~70–100%), raise such prospects, and have spurred startup companies to generate enthusiasm and attract investors (Hayden, Reference Hayden2017), as well as ambitious strategies for prevention (Couzin-Frankel, Reference Couzin-Frankel2017).

We emphasize that what we are presenting here is not a new analysis or method, but an overlooked necessary step for calculating a classifier's predictive value and thus estimating its clinical utility. In fact, the influence of the prevalence of disease on the predictive values of diagnostic/screening classifiers has long been recognized such that increasing prevalence increases PPV and decreases NPV (Mausner & Kramer, Reference Mausner and Kramer1985; Altman & Bland, Reference Altman and Bland1994), as also shown in our prior study of ASD (Skafidas et al. Reference Skafidas, Testa, Zantomio, Chana, Everall and Pantelis2014).

We illustrate this point by an examination of two recent influential studies reporting on the promise of such diagnostic classifiers. The first study (Hazlett et al. Reference Hazlett, Gu, Munsell, Kim, Styner and Wolff2017) reports on a diagnostic classifier that uses brain surface area of 6–12-month-old siblings of children with ASD, to predict whether these infants would develop the condition at age 24 months. It is reported that a deep-learning algorithm that primarily used this brain measure, correctly classified which of the infants developed the condition at a 94% level of accuracy, with 88% sensitivity, and 95% specificity. This corresponded to 81% PPV, and 97% NPV.

Relevant to our argument, the reported sensitivity and specificity values in this study were based on the analysis of 179 infants of high familial risk, of whom 34 infants developed ASD at 24 months of age. The crucial point to which we would like to draw the readers’ attention is that the resultant predictive values are based on the prevalence of ASD in this test sample, which is at 19% (or 34/179). However, the epidemiological prevalence of ASD in children having siblings with ASD in this sample is likely to be overestimated (Szatmari et al. Reference Szatmari, Chawarska, Dawson, Georgiades, Landa and Lord2016), and estimates from a large population study suggest a much lower prevalence of 6.9% for full siblings, 2.4% for maternal half-siblings, and 1.50% for paternal half-siblings (Gronborg et al. Reference Gronborg, Schendel and Parner2013). Under such uncertainty, of over- or under-estimation of prevalence rates, the clinical utility of the classifier simply cannot be evaluated; substantiated epidemiological prevalence rates are a necessary first step to assessing the true predictive validity of any diagnostic classifier. Therefore, when adjusting for a prevalence of 6.9%, for example, their test with 88% sensitivity and 95% specificity yields 57% PPV and 99% NPV. These values translate to a high false discovery rate of 43% (i.e. the probability of misclassifying those with a condition as without), and low false omission rate of 1% (i.e. the probability of misclassifying those without a condition as having the condition), which substantially undermines the clinical utility of the classifier to detect risk for ASD among infants at high familial risk for ASD.

To illustrate more fully the dependency of predictive values on the prevalence rate within a study cohort compared with the estimates in the population, we repeated the same analysis from the Hazlett et al. (Reference Hazlett, Gu, Munsell, Kim, Styner and Wolff2017) study by adjusting for the prevalence of ASD in the general population (1.13%) (C.D.C.P, 2012), paternal (1.5%) and maternal (2.4%) half-siblings (Gronborg et al. Reference Gronborg, Schendel and Parner2013), as well as for the prevalence of ASD in dizygotic (35%) and monozygotic (70%) twins (Hallmayer et al. Reference Hallmayer, Cleveland, Torres, Phillips, Cohen and Torigoe2011) (see Fig. 1). This figure underscores the importance of understanding the sources of variation in the prevalence estimates of the condition of interest and their impact on the predictive values of screening assessments or biological markers. 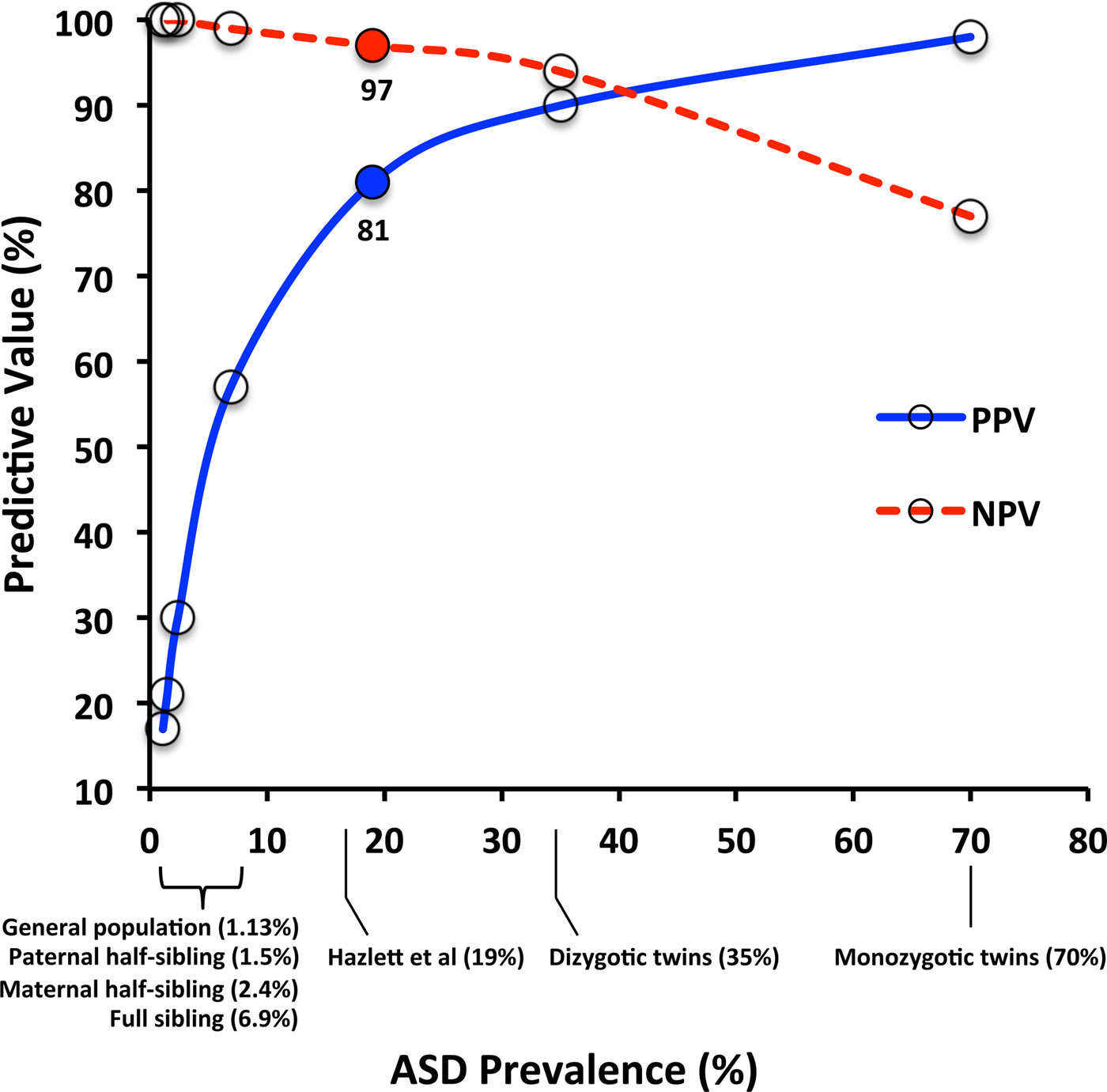 Our discussion underscores that the utility of a diagnostic classifier for a particular condition depends both on the discriminatory value of the classifier and on the prevalence of the condition in the population of interest. Accurate predictive values are particularly important when screening assessments or biological markers are considered as early indicators that lead to early identification of diseases. Failure precisely to calculate predictive values may lead to misleading conclusions about the utility of the assessment tools and/or biological markers for the professional community as well as the general population. Therefore, clinical classifiers should be developed in tandem with rigorous epidemiological studies to ascertain the prevalence of psychiatric conditions in both general and high-risk populations. Above all, the importance of accurate prevalence estimates cannot be overlooked as it allows for the allocation of resources including use of screening assessments and biological markers for efficient interventions/preventions to lessen disease burden.