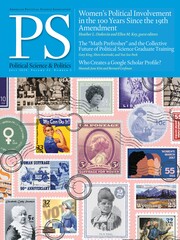 Symposium: Women's Political Involvement in the 100 Years since the Nineteenth Amendment