Progress in Neurotherapeutics and Neuropsychopharmacology 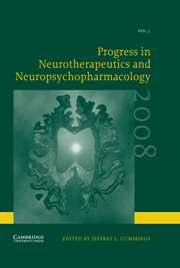