Latest volume of Proceedings of the Prehistoric Society 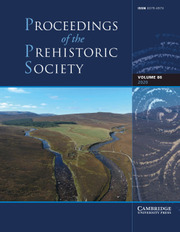