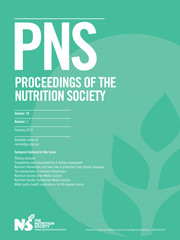 Symposium 2: Nutrient interactions and their role in protection from chronic diseases

Symposium 3: The mechanisms of nutrient interactions

Conference on ‘Diet, nutrition and the changing face of cancer survivorship’

Conference on ‘Diet, nutrition and the changing face of cancer survivorship’