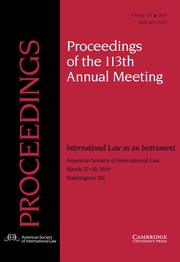 Challenges and Prospects for International Peace and Security: Un Peacekeeping, Nato, and the Udhr at 70

Obligations to Negotiate and Consult: Worthwhile Tool or Exercise in Futility?

Who's Minding the Farm? Trade Law and Agricultural Exports

Diverse Perspectives on the Impact of Colonialism on International Law