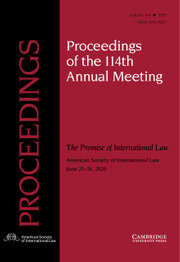 ISDS and Climate Change Policies: A Barrier, Facilitator, or Neither

Mock Oral Argument: The Case for Self-Determination in the 21st Century

What Promises Will States Keep Beyond National Jurisdiction?

The U.S. and International Courts and Tribunals: A Historical Approach to the Current Dilemma