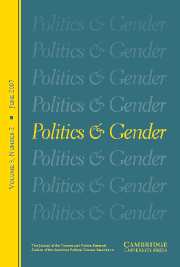 CRITICAL PERSPECTIVES ON GENDER AND POLITICS