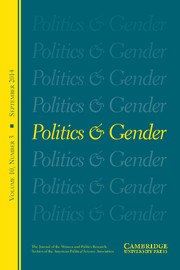 Advocating for Change in the Discipline: “Political Science, Heal Thyself”