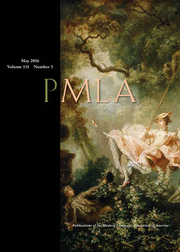 Commentaries on Raúl Coronado's A World Not to Come: A History of Latino Writing and Print Culture