Official Journal of the Philosophy of Science Association 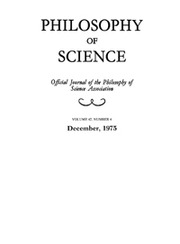