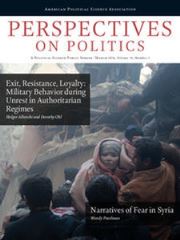 Cover Art: ALEPPO, SYRIA: December 23, 2013. In the Bab al-Nirab neighborhood of the city of Aleppo, a Woman is rescued from the rubble of her home after it was bombed by regime forces. As described by a Syrian American student who helped choose this photo: “She's not dead, but she looks terrifi ed to death – almost petrifi ed. Her back is to the destruction. She's made it in the sense that she's still breathing… The picture captures that moment suspended in time when everything and nothing are moving at once; when there is deafeningly loud noise and deafening silence. You know relief efforts are continuing in the background, but you can't take your eyes off of her.” (Photo by Jalal Almamo)

Review Symposia: What Exactly Is “The Chinese Ideal?”