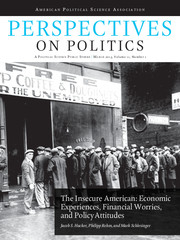 Book Reviews: Politics in The Face of Financial Crisis