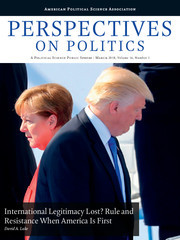 Cover Art: German Chancellor Angela Merkel (CDU) and US President Donald Trump pass each other during the opening of the new NATO headquarters, during the NATO summit in Brussels, Belgium, 25 May 2017. Photo: Kay Nietfeld/dpa | usage worldwide

Special Section: The Politics of Inclusion and Exclusion