The Experience of Listening to Music in the Nineteenth Century 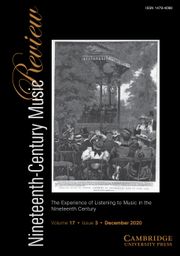