Defects and Diffusion in Silicon Processing 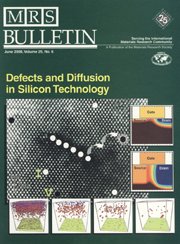