Greening the production and utilization of ammonia 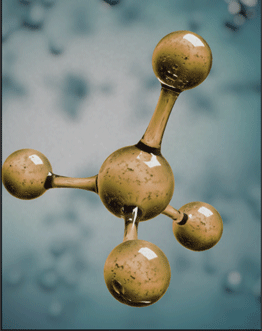 Ammonia can supplement hydrogen gas as a clean fuel to combat climate change. It overcomes hindrances that currently impede the realization of the full potential of hydrogen gas, including economical storage, political commitment, and safety concerns.

Ammonia can supplement hydrogen gas as a clean fuel to combat climate change. It overcomes hindrances that currently impede the realization of the full potential of hydrogen gas, including economical storage, political commitment, and safety concerns.

Ammonia, a zero-carbon-emission fuel (yielding dinitrogen and water when completely combusted), possesses unique advantages over hydrogen gas. First, ammonia production is abundant. According to the US Geological Survey, the global production of ammonia in 2019 reached 182 million metric tons, which is more than double the weight of hydrogen gas produced in the same year. Second, infrastructures for the liquefaction, storage, and transport of ammonia are already in place, since ammonia has been extensively used to manufacture agricultural fertilizers. Third, ammonia's relatively narrow explosive limit (15–28 vol% of NH3 versus 4–75 vol% of H2) and an odor threshold as low as 0.04 ppm ease the safety control for ammonia implementation. These merits impart ammonia increasing popularity as a supplement to the hydrogen energy regime.

For ammonia to become a sustainable fuel, its production must be completely changed. Conventionally, ammonia is synthesized via the Haber–Bosch process, which combines nitrogen and hydrogen gases into ammonia under temperatures of 400–500°C and pressures of 150–250 bar on surfaces of iron-containing catalysts. The nitrogen and hydrogen gases come from the air and natural gas reforming, respectively. This long-practiced production of ammonia, however, is by no means sustainable. It consumes more than 1% of global energy and emits ∼400 million tons of carbon dioxide if fossil fuels are used to heat reactors.

Replacing the energy input by sustainable energy resources (e.g., sunlight and wind) is attractive to green the synthesis of ammonia. Geoffrey A. Ozin, a professor of chemistry at the University of Toronto, has envisioned a solar refinery scheme outlining possible ways for sustainable production of ammonia (see Figure). This scheme integrates solar energy into the existing infrastructures, such as those for the air-separation and the Haber–Bosch reaction. It also bridges state-of-the-art electrocatalysis and photocatalysis of nitrogen fixation. For example, in a solar ammonia refinery, the Haber–Bosch process consumes hydrogen gas generated from solar water splitting and is powered by electricity converted from sunlight. The realization of this grand scheme requires breakthroughs in multiple experimental and technical aspects, including the availability of high-performance catalysts for ammonia formation.

Developing efficient nitrogen-reduction catalysts has been a hot topic in the fields of thermal, electrochemical, and photochemical catalysis. Researchers have synthesized a diverse array of heterogeneous catalysts, mostly based on metallic ruthenium and iron. These catalysts can break the triple bond in molecular nitrogen upon irradiating with solar light or applying electric biases. Despite their variety, most catalysts still suffer from a low production rate of ammonia and poor specificity toward dinitrogen reduction. To overcome these obstacles, researchers have initiated comprehensive mechanistic studies by investigating structure–property–function relationships of artificial catalysts, as well as understanding the origin of the exceptional performance of natural nitrogenase enzymes. The barrier to moving ammonia production away from the Haber–Bosch process is significant but is yet to be insurmountable.

Ozin is unsure if the scale of electrocatalysis or photocatalysis alone can produce sufficient green ammonia to meet the global ammonia demand. “Maybe small-scale operations integrated with specific ammonia-dependent industries would be technologically and economically viable. Of course, a source of solar H2 from electrochemical water splitting using renewable electricity would help reduce the greenhouse gas emission associated with the Haber–Bosch process.” Ozin also pointed out that some developing technologies—solar-driven, gas-phase, heterogeneous photocatalytic hydrogenation of N2, as well as a solar N2/H2O thermal-chemical process involving metal oxide catalysts under elevated temperatures—could become game-changers.

The economic viability of green ammonia is bright. According to a calculation by a research group led by Yushan Yan and Shimshon Gottesfeld at the University of Delaware, ammonia has the lowest source-to-tank cost among fuels producible from air and water using renewable electricity (including hydrogen gas and methanol), reaching USD$4.50 per gasoline gallon equivalent in terms of the energy content. Additionally, Yan commented that “making clean ammonia from air and water by affordable electroreduction of nitrogen would be ideal. However, an intermediate step likely more accessible than nitrogen electroreduction does exist, which is to produce the hydrogen used in the ammonia synthesis by water electrolysis using renewable electricity.”

Suppose that green ammonia is now readily available. The next challenge is to extract the chemical energy stored in ammonia. Using ammonia as a fertilizer is one possibility, but turning it into electrical or thermal energy is more captivating. Conventionally, ammonia is thermally decomposed to release hydrogen gas for energy generation. With ammonia fuel cells, ammonia can release its energy directly as electricity.

Ammonia fuel cells still have a long way to go before their large-scale applications. According to Yan, to make ammonia fuel cells practical, “We have to further reduce the cost by enhancing the activity of anode catalysts, developing novel catalysts, and improving cell durability by minimizing ammonia crossover.” Ammonia crossover refers to the diffusion of ammonia across the separator into the cathode chamber, leading to loss of the fuel. In terms of industrial applications, Gottesfeld claims that the “fabrication of ammonia fuel cell stacks with a beginning-of-life performance comparable to those demonstrated in the laboratory and with a stable performance over 1000 hours of operation” are the main challenges.

The research team of Yan and Gottesfeld has engineered an ammonia fuel cell with improved performance. The fuel cell is equipped with a polymer-based hydroxide-exchange membrane and can operate at 80°C to speed up ammonia oxidation. The researchers also developed cathode catalysts immune to ammonia crossover. The cell achieved a peak power density of 400 mW/cm2, approaching the performance of hydrogen fuel cells. The project has received a USD$2.5 million grant from the Advanced Research Projects Agency-Energy (ARPA-E), US Department of Energy. This fund will support a development team led by the University of Delaware and involving Brookhaven National Laboratory and POCellTech Ltd. in Israel. 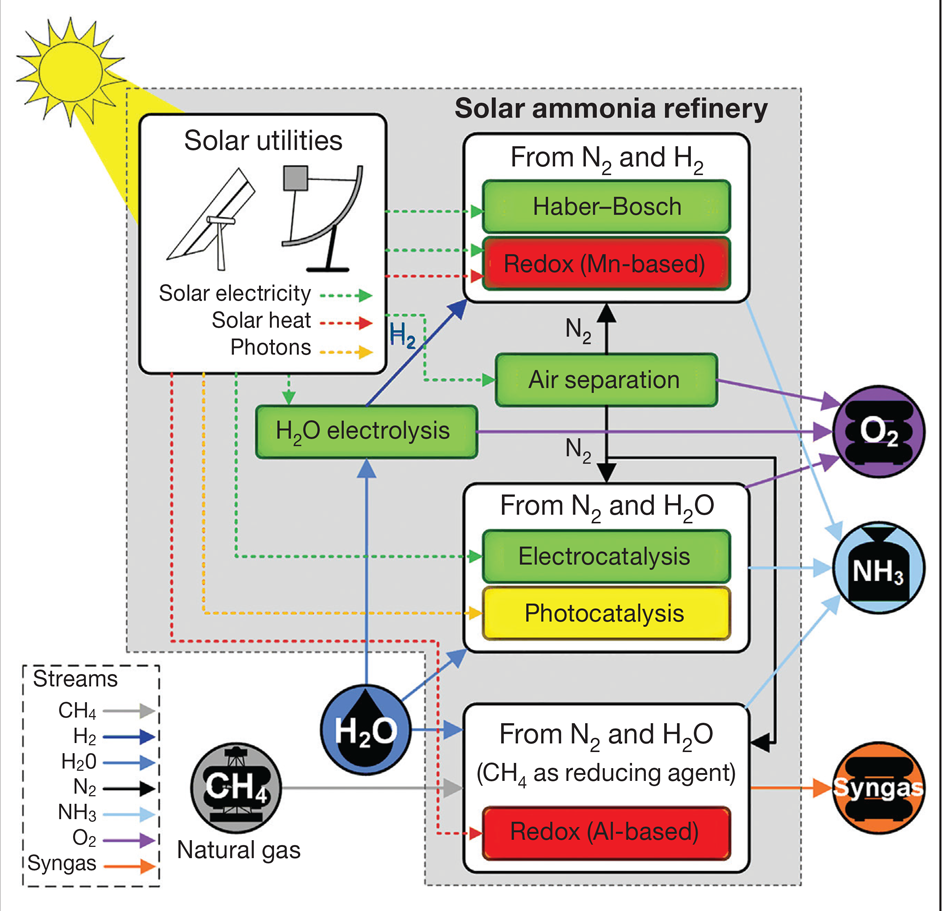 The processes in a solar ammonia refinery. Credit: Joule.

Apart from laboratories, ammonia fuel cells have found their way into large-scale industrial applications. A notable example is the ShipFC – Green Ammonia Energy System project managed by the Norwegian Centers of Expertise Maritime CleanTech. This project aims to construct an offshore vessel, Viking Energy, which will sail solely on clean fuels for up to 3000 hours annually. The energy propelling the ship will come from retrofitted ammonia fuel cells to provide a peak power of 2 MW. These solid-oxide fuel cells (SOFCs) contain novel solid-state electrolytes and are more durable than those with liquid electrolytes. Yara, a Norwegian chemical company, will supply green ammonia made by electrolysis. The EU awarded this project €10 million earlier this year.

The ShipFC project is scheduled for completion in 2022. “We are still in an early stage with initial design clarifications and development of the SOFC technology,” said Tore Boge, manager of the ShipFC project. “There is also a lot of data that needs to be collected and spread amongst the partners to make sure all partners can contribute with their expertise.” Boge's team is conducting safety assessments and risk evaluations. “We will couple the experience Yara has with the maritime safety expertise of the Norwegian Eidesvik, the Finnish Wärtsilä, the University of Strathclyde in the UK, and other partners to ensure that safety is taken care of. All the safety and design works will be approved by the Norwegian Maritime Authorities before the vessel can sail using ammonia-powered SOFCs,” said Boge. If successfully installed, Viking Energy can become the world's first ammonia-powered vehicle on the sea.

In addition to ocean transport, ammonia fuel has been used in farmlands. In 2009, Jay Schmuecker a retired engineer from the NASA Jet Propulsion Laboratory at the California Institute of Technology, established a solar-powered hydrogen, nitrogen, and ammonia generation and storage system on his Iowa farm. “I wanted to demonstrate that farm vehicles can use on-site-generated carbon-emission-free fuels,” said Schmuecker. He mixes ammonia with 10–20% hydrogen to fuel his 9.6 L V8 tractor engine. The farm produces ammonia using hydrogen gas from a commercial hydrogen generator powered by sunlight and a 240-V electric grid, as well as ultrapure nitrogen gas from a pressure swing adsorption unit. Batch, rather than continuous processing, is used because of the intermittent solar-energy supply. Because of the immediate need to reduce carbon emissions, Schmuecker believes that ammonia-fueled internal-combustion engines should be used to develop safety regulations on ammonia-fuel utilization before the ammonia fuel-cell technology is mature. Additionally, Schmuecker found that “two-thirds of the energy needed to make ammonia is consumed [in] generating hydrogen from water. Less energy-intensive ways of hydrogen generation are needed.”

Shifting our energy dependence from fossil fuels to sustainable energy is nontrivial. Sustainable energy, including green ammonia, will continue to co-exist with carbon-containing fuels in the foreseeable future. Advancement in the production, distribution, and utilization of sustainable energy resources are pivotal to mitigate climate change and fossil-fuel depletion.

Ammonia has the lowest source-to-tank cost among fuels producible from air and water using renewable electricity, including hydrogen gas and methanol.

Greening the production and utilization of ammonia
×

Greening the production and utilization of ammonia
×

Greening the production and utilization of ammonia
×
×