Sulh-i Kull as an Oath of Peace: Mughal Political Theology in History, Theory, and Comparison 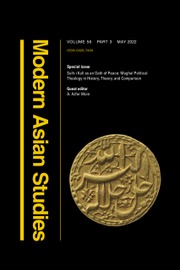