Plants Grow Up by Sensing “Down”

The gravity sensor of plants is unique among biological sensors in its ability to combine sensitivity and robustness to cope with a fluctuating and noisy environment. It is found in specific cells, called statocytes, in which tiny assemblies of starch-rich particles, called statoliths, settle at the bottom of the cell and indicate the direction of gravity. When a shoot or root is tilted, the change in direction is detected by the statoliths within statocytes, which triggers a complex signaling pathway involving the redistribution of growth hormones within the tissue. This in turn leads to differential growth of the plant organ and the bending of the organ toward vertical. A remarkable feature of this gravitropic response is that it is extremely sensitive, even to the slightest tilt. This is key to maintaining the vertical posture of a plant on Earth.

It has long been assumed that statocytes behave as a force sensor, whereby gravity is detected by sensing the weight of statoliths on the cell edges or by interaction with the cytoskeleton. However, recent experiments indicate that the gravity sensors of plants (gravisensors) function as an inclination sensor rather than a force or acceleration sensor. This suggests that the position of the statoliths, not their weight, is the relevant gravitropic stimulus. In order to determine how this works Antoine Bérut, Hugo Chauvet, Valérie Legué, Bruno Moulia, Olivier Poulquen, and Yoël Forterre [Reference Bérut1] conducted a series of experiments. One problem to be solved was that an assembly of particles such as sand does not respond to slight changes in tilt. A pile of grains remains static due to friction and other factors that keep the grains interlocked until a critical angle, the “avalanche angle,” is reached. The sensitivity of the gravisensor in plants is not compatible with this.

Bérut et al. addressed this issue by investigating in situ the response of statolith assemblies to a wide range of inclinations over long periods of time. They found a peculiar flowing behavior not observed in classical granular material where statoliths first flow in bulk like a granular avalanche but then creep and recover a free flat surface like a liquid. To visualize statolith dynamics in response to plant inclination they examined statocytes of wheat coleoptiles. A coleoptile is the pointed protective sheath covering the emerging shoot of wheat and other plants. Unlike leaves, the pre-emergent coleoptile does not accumulate significant chlorophyll or other pigments, so it is very pale, allowing for good visualization of its interior. For this reason the wheat coleoptile is a classical model in plant gravitropism studies. Bérut et al. laid a light microscope on its side so that the stage was oriented in the vertical plane. Sections of coleoptiles were placed vertically on the stage which could be rotated. At low magnification, groups of statoliths were seen to sediment at the bottom of cells after several minutes at rest (Figure 1, left). Higher magnification revealed that a single cell contained groups of a few tens of statoliths (about 4.5 μm in diameter) in a pile at the bottom of the statocyte (Figure 1, right). Their data showed that the statoliths moved and responded to the slighted inclination of the piles. This is characteristic of a liquid, not a pile of particles. 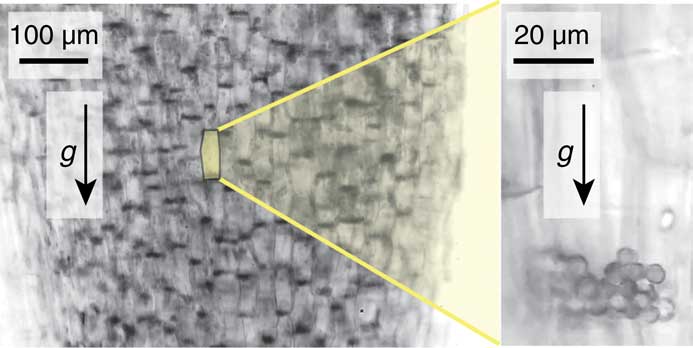 Figure 1 (Left) Visualization of statolith piles (dark areas) sedimented under gravity at the bottom of gravisensing cells in wheat coleoptiles. (Right) Close-up of a gravisesing cell showing the individual statoliths in a pile.

This uncharacteristic behavior could be explained by one of two mechanisms: a physical one involving Brownian motion, or a physiological one involving the cytoskeleton. Using an in vitro system, Bérut et al. determined that Brownian motion would be effective only at a much higher temperature than normally occurs in plants. A better explanation appears to be physiological agitation, apparently by the actin-myosin network dynamics that “unlock” statoliths, allowing them to respond to any inclination. Future studies with agents or mutants that perturb the cytoskeleton could precisely explain this vital physiological process.

Plants Grow Up by Sensing “Down”
×

Plants Grow Up by Sensing “Down”
×