Embryonic development is a complex process that is difficult to observe directly. Histologic examination of fixed embryos does not capture the dynamics of development. Other imaging methods have limitations, such as low resolution and the inability to take advantage of transgenic strains with fluorescent reporters. Studies with superresolution microscopy of specimens in vitro has limitations, such as the inability to mimic the uterine environment past embryonic day 9 (E9) when various organs form.

A recent study [Reference Huang1] by a large international group led by Qiang Huang, Rudolf Jaenisch, and Xiling Shen demonstrated that it is possible to overcome some of these limitations by implanting a window into the uterus of pregnant mice (dams). This allows intravital imaging that can be used to observe the formation of organs at high resolution from E9.5 to birth. The embryo becomes easily identifiable under a dissection microscope at about E9.5 when the allantois fuses with the chorionic plate resulting in a large surface area for gas and nutrient exchange.

Initially an optical window (and a clip to stabilize the window) was designed by Huang et al. and fabricated by 3D printing. A round incision was made in the abdominal wall, and some skin was removed. The uterus was exteriorized, and an embryo near an ovary was selected. The window was implanted in the uterine wall, the embryo was sutured to the abdominal muscle, the abdominal muscle was sutured to the window, and the window was secured in position with glue. This minimized motion from the dam's breathing. The initial window was circular with a 10 mm inner diameter and 1.5 mm depth. It was replaced with a larger, elliptical window (long axis 15 mm) during the later stages. The window was covered with a glass cover slip that could be removed for manipulating the embryo.

For the early stages the decidua and uterine muscle were stripped to improve visualization of the embryo. After E12.5 the decidua diminished, and the uterine wall became transparent, so there was no need for the stripping procedure. These procedures did not interfere with embryo survival in most cases as indicated by a beating heart. Later histological examination using hematoxylin and eosin staining showed no structural abnormalities in the embryos underneath the window. After the pups were born they suckled normally, and pups imaged as embryos under the window were indistinguishable from their littermates. They grew normally without noticeable abnormalities.

Transgenic mice with cell lineage-specific expression of fluorescent reporter are commonly used to study development in live organisms. Huang et al. used stereoscopic and two-photon microscopy to observe embryos in transgenic (for example, Wnt1-Cre-tdTomato) mice. They conducted a series of studies that not only provided proof of concept for the use of these windows, but also resulted in important information about embryogenesis. Briefly, the studies observed transient neurotransmission and early vasculatization neural crest cell (NCC)-derived perivascular cells in the brain, autophagy in the retina, viral gene delivery, and chemical diffusion through the placenta (Figure 1). They combined the imaging window with increasing the permeability of plasma membranes using an electrical field (electroporation) to label and track cell division and movement within embryos in utero. In addition, they observed that clusters of mouse NCC-derived cells expanded in interspecies chimeras, whereas adjacent human donor NCC-derived cells shrank. 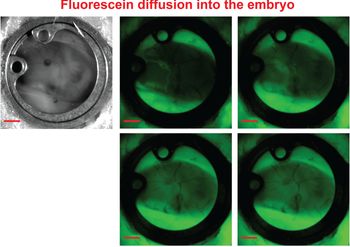 Huang et al. have developed an intravital imaging window for visualizing and manipulating live mouse embryos in vivo from E9.5 until birth (around E20). This elegant study demonstrates the capability to image whole embryos in utero at high resolution, opening many new avenues for investigation: brain formation, peripheral nerve development, placental development, birth defects, gene editing, development of the immune system, environmental effects, and interspecies chimeras. It will be fascinating to see what new discoveries in embryogenesis are revealed using this exciting new technique!