Imaging Many Proteins Frozen In situ

The fundamental tenet of modern biological understanding is the relationship between structure and function. That is, what something does is directly related to its shape, what it is made of, and the arrangement of its parts. This is true at every size scale from the organism, to the organ system, the tissue, the cell, the organelle, the macromolecular complex, and finally at the molecular level. Recent advances in microscopic imaging have provided game-changing progress that is important for the understanding of biological mechanisms. A large group led by Eric Betzig and Harald Hess, and including David Hoffman and Gleb Shtengel, recently used a correlative microscopy technique that combines three-dimensional (3D) fluorescence super-resolution (SR) microscopy and high-resolution volume reconstruction by block-face scanning electron microscopy (SEM). Using these techniques Hoffman et al. imaged whole cells and defined a “pipeline” sequence for sample preparation and imaging steps using cryogenic fixation, as opposed to room-temperature chemical fixation, to preserve the fine details of macromolecular structural relationships. By fixing the cells in a matter of milliseconds using high-pressure freezing and then using liquid helium to maintain them at a temperature as low as 8° Kelvin, formation of ice crystals that would have greatly altered the ultrastructure was prevented. This freezing process is referred to as vitrification.

3D correlations throughout the cell revealed unexpected localization patterns of proteins. In fact, nearly every system studied by Hoffman et al. revealed unexpected results. Examples of such results include: vesicles within the nucleus that demonstrated a marker protein associated with the endoplasmic reticulum; an increase in the irregular morphology of peroxisomes as their size increased; compartments with lysosomes that had exceptionally diverse and convoluted morphology; a web-like adhesion network, probably of actin filaments, between cerebellar granule neurons; and classically EM-defined domains of heterochromatin and euchromatin each characterized by the presence or absence of markers of transcriptional activity. With careful registration of the SR fluorescence image volumes and the images obtained with FIB-SEM, the investigators were able to image whole cells with a resolution down to about 40 nanometers. 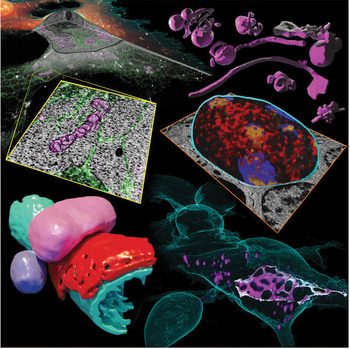 Figure 1: Cryogenic super-resolution fluorescence microscopy of high-pressure frozen cells coupled with FIB-SEM enables multicolor 3D nanoscale visualization of proteins in the context of global ultrastructure. Clockwise from upper left: Volume-rendered cell with correlated orthoslice (inset) of mitochondria and endoplasmic reticulum (ER) proteins; endolysosomal compartments of diverse morphology; heterochomatin subdomains defined by protein reporters of transcriptional activity; adhesion proteins correlated to membrane roughness at contacting cerebellar granule neurons; and a peroxisome (pink) juxtaposed to an ER sheet (red) and mitochondrion (cyan). The size of the orthoslice on the left is 4 × 4 µm. The one on the right is 7.5 × 11.5 µm.

Much of what we know about the structural and functional organization of the cell comes from the synthesis of findings from electron microscopy, biochemistry, and molecular biology. Whereas this synthesis has proven to be powerful, fusing the insights from these disparate methods necessarily involves developing new models, and therefore possible biases, of how specific proteins are spatially distributed in relation to ultrastructure. Using this new specimen processing and imaging pipeline, Hoffman et al. were able to unambiguously demonstrate precise localization of selected proteins. They also outlined how their pipeline can be used to screen a large number of cells and then select volumes of interest.

Finally, Hoffman et al. outlined future directions where their correlative technique could be made even more powerful. However, even in its current form, their cryo-SR/FIB-SEM system is quite elegant and can address a broad range of biological questions. It is important to note that this instrumentation is located at the Janelia Advanced Imaging Center and is available to outside users. One can apply through the website www.aicjanelia.org.

Imaging Many Proteins Frozen In situ
×

Imaging Many Proteins Frozen In situ
×

Imaging Many Proteins Frozen In situ
×
×