Imaging In Vitro on the Nanometer Scale with Ultrasound

There have been impressive advances in recent years in electron microscopy and light microscopy, but imaging molecular structures in vitro under physiological conditions has remained elusive. In order to provide spatial and temporal resolution on the nanoscale, fixation by chemical or freezing methods won’t work, and introducing fluorescent or other tags would likely perturb the system. Scanning probe microscopy, such as atomic force microscopy (AFM), can provide high spatial resolution but is limited to identifying surface features and mechanical properties. During the past decade, acoustic-wave detection methods have been able to determine mechanical properties because elastic strain waves can travel through different materials without damaging them. Combining high-frequency ultrasonic waves and AFM, such that AFM can be used as a local mechanical detector of elastic waves, shows great promise for studying the nanomechanics of materials and subsurface imaging. However, imaging studies under physiological conditions have proven challenging because of acoustic dampening in aqueous media.

Recently Gajendra Shekhawat, Steven Dudek, and Vinayak Dravid have developed an ultrasonic bioprobe with nanometer-scale resolution for in vitro molecular imaging under physiological conditions while overcoming the limitation of ultrasound attenuation [Reference Shekhawat1]. They conducted two proof-of-principle studies. In one they fabricated magnetic nanoparticles embedded within the core of silica core-shell nanoparticles with an average diameter of 30 to 40 nm, and also they could identify the receptor layer coating, which was estimated to be about 5 to 10 nm. With the ultrasound bioprobe they were able to image the magnetic nanoparticles beneath the surface of the shells. In the second system of live endothelial cells (ECs), they performed subcellular nanomechanical imaging.

Shekhawat et al. were able to overcome acoustic dampening within a fluid using an ultrasonic bioprobe controller with integrated feedback electronics. They used the frequency shift of the received signal as evidence of altered stiffness. By controlling amplitude and detecting frequency, or phase, they produced an image dependent on the out-of-phase motion of the AFM probe.

The experimental model with ECs was selected because of possible application in the study of acute lung injury/acute respiratory distress syndrome (ALI/ARDS), a devastating complication of acute respiratory failure. Shekhawat et al. used an ultrasound bioprobe to directly measure the effect of the stimulating agent thrombin on the mechanics of intracellular fiber formation in these ECs. They demonstrated prominent cytoskeletal fibers in the phase image together with other subcellular features near the nuclei of these cells. Their results demonstrate the effectiveness of their technique to image the internal cellular structures and those along the cell periphery.

The development of an ultrasound bioprobe for intracellular and in vitro molecular imaging opens up new applications for in vitro subcellular biological imaging at high image resolution. If this technique can be independently replicated, it will fill a critical void in biology for non-destructive subsurface imaging with nanometer spatial resolution. [2] 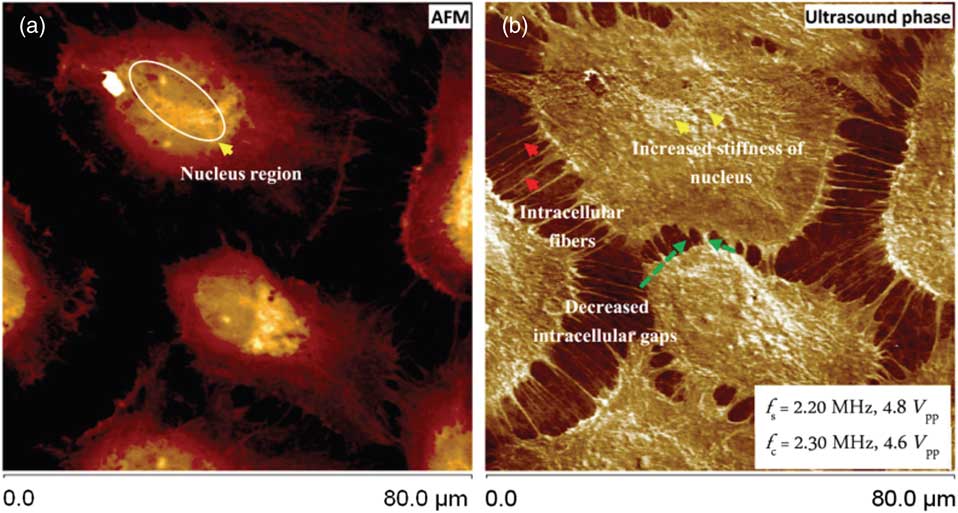 Figure 1 Live endothelial cells altered by addition of thrombin. (a) AFM topographical image and (b) ultrasound bioprobe phase image demonstrating remarkable contrast from intra-cellular fibers. Intracellular fibers are most clearly seen in the ultrasound phase image along with stretched gaps and sub-cellular phase contrast on the nuclei region of the cells.

Imaging In Vitro on the Nanometer Scale with Ultrasound
×

Imaging In Vitro on the Nanometer Scale with Ultrasound
×

Imaging In Vitro on the Nanometer Scale with Ultrasound
×
×