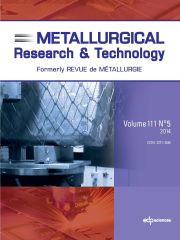 La Revue de Métallurgie is forever associated with the name of the great French Scientist who created it in 1904: Henry Le Chatelier. On the occasion of the centenary of the Revue, the authors draw an overview of its history that is intimately linked with the one of Metallurgy. More recently, la Revue de Métallurgie has been able to evolve permanently with a view to afford a better service to its readers. Other French journals have merged with the Revue and an electronic version has been introduced in 2000 as a tribute to the new century. Nevertheless other circumstances must now be allowed for, in an ever more global World with new European industrial groups and universities or engineering schools ever more focused on the international. From now on, Industry and Science, the preferred couple of Henry Le Chatelier, must be considered on a European basis. This shows the way for la Revue de Métallurgie in the Future.