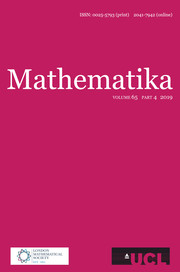 We prove the analog of Cramér’s short intervals theorem for primes in arithmetic progressions and prime ideals, under the relevant Riemann hypothesis. Both results are uniform in the data of the underlying structure. Our approach is based mainly on the inertia property of the counting functions of primes and prime ideals.

A famous theorem of Cramér [Reference Cramér2] states that, assuming the Riemann hypothesis, there is always a prime between

$x\rightarrow \infty$ . Apart from the explicit values of the involved constants, this is still the best known result about primes in short intervals, under the Riemann hypothesis. Sharper results can be obtained assuming various forms of the pair-correlation conjecture for the zeta zeros; see, e.g., Heath-Brown [Reference Heath-Brown7], Languasco et al [Reference Languasco, Perelli and Zaccagnini13] and the literature quoted there. A simple proof of Cramér’s theorem can be obtained from a suitable smoothed explicit formula for

In this paper we show that rather general theorems of Cramér’s type follow, under the appropriate Riemann hypothesis, from two results often already available in the literature, namely a short intervals mean-square estimate and a Brun–Titchmarsh-type theorem. Indeed, the latter result implies that the relevant counting function satisfies a suitable inertia property, which is then played against the short intervals mean-square bound to get a contradiction if the interval is not too short. We illustrate our approach in the case of primes in arithmetic progressions and of prime ideals, since apparently these results do not appear in the literature. In the first case all the ingredients are already known, so we proceed directly to the proof of Cramér’s theorem for arithmetic progressions. In the case of algebraic number fields we first deal with the required ingredients; see in particular Proposition 1 below, which is of some independent interest. In both cases our results are uniform in the data of the underlying structure. However, in the second case the inertia method gives Proposition 3, which in the uniformity aspect is weaker than Theorem 2, proved here by the classical smoothed explicit formula approach. This is due to the lack, in the current literature, of sharp uniform bounds of Brun–Titchmarsh type for number fields. We shall discuss this issue later on in the paper.

$d_{K}$ the absolute value of its discriminant, by

$\mathfrak{P}$ the prime ideals of the ring

$N(\mathfrak{P})$ their norm and write

Finally, given an integer

$q\geqslant 1$ and a number field

$K$ , we denote by GRH and DRH the Riemann hypothesis for the Dirichlet

$L$ -functions associated with the characters

$q$ ) and for the Dedekind zeta function

$(a,q)=1$ and assume GRH. Then there exist absolute constants

Clearly, under the same assumptions the same argument also gives

$K$ . Then there exist absolute constants

As before, the same proof shows also that

$K$ the classical results known for

$\mathbb{Q}$ one should replace

$K$ is a cyclotomic field then the quality of the

$K$ -uniformity in Theorem 2 is comparable to the

We conclude by remarking that the technique in the proof of the above theorems works for rather general counting functions, giving individual short intervals results as soon as suitably sharp short intervals mean-value and inertia-type results are available.

As customary, we prove Theorem 1 for the

$\unicode[STIX]{x1D713}$ -function and then the required result is recovered by elementary arguments, since

where the constant in the

As anticipated in the Introduction, in the number fields case we first present the proof of a weaker form of Theorem 2 in the uniformity aspect, obtained by the inertia approach. Write

$K$ . Then there exist absolute constants

$\ll$ -symbols below are absolute. Denoting by

$|\unicode[STIX]{x1D6FE}|\leqslant T$ , using the notation in the Introduction, we unconditionally have

$h^{2}$ on the right-hand side should be replaced by

while the contribution of the remaining part of the explicit formula is, thanks to (5),

Proposition 1 represents another instance of Lang’s “recipe” reported in the Introduction. As far as we know, such a phenomenon has not been established in the case of Brun–Titchmarsh-type bounds, and actually it is not clear to us how the right extension should look like in this case; we briefly discuss this issue at the end of the section. Hence, we use the following simple but uniform bound, which however is unlikely to be sharp in the range needed here.

$K$ be a number field and

Proof. Again we use the notation in the Introduction. Let

$k_{j}\geqslant 1$ , be the exponents of the prime powers in the interval

Proof. We argue along the lines of Theorem 1. Indeed, for

$c,c^{\prime }>0$ . Playing this against Proposition 1, we therefore obtain that

$\unicode[STIX]{x1D70C}$ runs over the non-trivial zeros of

$K$ ; we are not concerned with their values, since

$c_{K}^{\prime }$ simply disappear after the manipulations leading to the next displayed equation. Introducing the weight

Now we split the sum over the

From (11), we obtain the behavior of the unweighted sum, observing that for every

We conclude with a brief discussion on the Brun–Titchmarsh theorem for number fields and its relevance to this paper. Note that the dependence on the data of

$K$ in Proposition 2, where bounded

$h$ are allowed, is essentially best possible. Indeed, if a prime

$c>0$ . Note that, although the constant in the classical Brun–Titchmarsh theorem is of great interest, the absolute constant in front of

$h$ the dependence on

$K$ , and even under DRH its dependence on such invariants is not completely under control. This adds some difficulties to the problem of obtaining sharp versions of Proposition 2. Perhaps one can prove that

$K$ . Bound (12) can be obtained by coupling the classical Brun–Titchmarsh theorem for arithmetic progressions with the Kronecker–Weber theorem for abelian extensions of

$\mathbb{Q}$ . Actually, when (12) is coupled with Proposition 1, we get back, in the abelian case, a result of the same quality as Theorem 1.

We wish to thank Olivier Ramaré for detecting some inaccuracies in a previous version. This research was partially supported by grant PRIN2015 Number Theory and Arithmetic Geometry. The authors are members of the INdAM groups GNSAGA and GNAMPA.