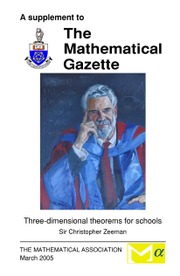 Some mathematical appreciations in the physical sciences

According to reports in the media, there is a dearth of practical examples that students of mathematics en route to their qualification can feast upon, at either sixth form level or an undergraduate level. Despite these alleged shortages, it is this author’s opinion that there are numerous examples that can be drawn from the literature and it is the purpose of this article to address the issue by providing examples from the realms of antenna reflector theory and the use therein of conic sections. Some students will be familiar with conic sections and others might not, but the numerous instances of their manifestation in the real world would suggest that they are a force to be reckoned with, and this is certainly true from a mathematical perspective.

Some mathematical appreciations in the physical sciences
×

Some mathematical appreciations in the physical sciences
×

Some mathematical appreciations in the physical sciences
×
×