In the past decade, though many inherent problems originating from the heteroepitaxial growth in wide-bandgap III-V nitride materials exist, there have been considerable developments that have led to the remarkable demonstrations of high-brightness blue light emitting diodes [Reference Kozodoy, Abare, Sink, Mack, Keller, DenBaars, Mishra and Steigerwald1,Reference Nakamura, Senoh, Isawa, Nagahama, Yamada and Mukai2], laser diodes [Reference Nakamura, Senoh, Nagahama, Isawa, Yamada, Matsushita, Kiyoku, Sugimoto, Kozaki, Umemoto, Sano and Chocho3], and high-frequency field-effect transistors (FETs) [Reference Burm, Schaff, Eastman, Amano and Akasaki4,Reference Chen, Khan, Yang, Sun, Shur and Park5]. In particular, high-frequency FETs using GaN/AlGaN heterostructures have been realized using uniformly Si doped layers. In III-V compound semiconductors such as GaAs, FETs with characteristics superior to those of conventionally doped transistors have been fabricated using the delta-doping technique [Reference Nakajima, Otobe and Shiga6], which can achieve very narrow doping distribution along the epitaxial growth direction and up to now has been studied in a variety of materials and devices [Reference Schubert7-Reference Kim, Lim, Yang, Shin, Lim and Lee9]. It was recently demonstrated that the inclusion of delta doping could improve laser stability in the face of temperature variations, in comparison with conventional quantum well lasers [Reference Buchinsky, Blumin and Fekete10].

Even though the growth temperature of GaN in metalorganic chemical vapor deposition (MOCVD) is much higher than that of conventional III-V compound semiconductors, it is considered to be important to investigate delta-doping in III-V nitride materials for high-performance device applications. To our knowledge, up to now there are no reports about the application of delta-doping on III-V nitrides. In this letter, we demonstrate Si delta doping in GaN grown by low-pressure MOCVD and investigate the effects of delta-doping time and postdelta-doping purge step on carrier concentration.

The samples used in this study were grown in a vertical rotating MOCVD reactor operating at 200 Torr. Trimethylgallium (TMG), ammonia (NH3), and 100 ppm silane (SiH4) in hydrogen were used as Ga, N, and Si delta-dopant precursors, respectively. Substrates used in this experiment were c-plane sapphires, which were degreased in an organic solvent and then slightly etched in a hot solution of 3H2SO4:1H3PO4 for 10 min. After the thermal cleaning in H2 environment at 1070 for 10 min, a 20-nm-thick GaN buffer layer was deposited at 520Finally, the substrate temperature was raised to 1040 to grow the GaN overlayer. The V/III ratio for the GaN overlayer was 1560. Under these conditions, background doping was 8 1016 n-type. The growth procedure for Si delta-doped GaN was as follows. First, an undoped GaN layer (1.7 ) was grown, after which TMG supply was stopped for 10 s on top of the GaN layer, while at that time ammonia was kept flowing. At this pre-delta-doping purge step, the surface became N-rich. This was followed by Si deposition for several tens of seconds under a Ga-free condition. The SiH4 flow rate was 2 4 nmol/min. Then, we deposited an undoped GaN cap layer by two different methods: (1) post-delta-doping purge step for 10 s with flowing ammonia followed by the growth of a cap layer; and (2) direct growth of a cap layer without the post-delta-doping purge step. After the structure growth, a Schottky barrier was fabricated by thermal evaporation of gold through a shadow mask containing 620 dots. Aluminum was deposited over a large area on the perimeter of the crystal face to serve as an ohmic contact as shown in Fig. 1. The carrier concentration was obtained by capacitance-voltage (C-V) measurement, which was performed with a 1 MHz capacitance meter (Boonton 72-4B) at room temperature. 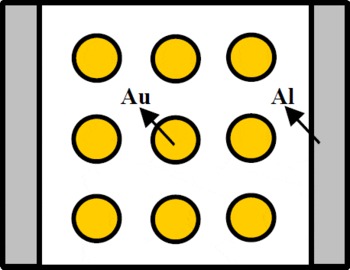 The C-V profiles of Si delta-doped GaN layers depending on the delta-doping time are shown in Fig. 2. Silane flow rate was 4 nmol/min, and the pre- and post-purge times on both sides of delta doping were the same, i.e., 10 s. Figure 2 demonstrates that Si delta-doped GaN can be successfully grown using MOCVD. The maximum C-V concentration of Si delta-doped GaN does not increase with the increase in delta-doping time, in contrast to a strong linear dependence for Si delta-doped GaAs [Reference Shieh, Hsu and Wu11]. This shows that the Si delta-doping process might be dominated by the desorption of Si dopant from the nongrowing surface. The growth temperature of GaAs is lower than that of GaN. Therefore, as a result of low thermal decomposition efficiency of Si doping precursors, Si delta-doping concentration in GaAs is mainly determined by the adsorption process [Reference Shieh, Hsu and Wu11]. However, due to the high growth temperature of GaN, the thermal decomposition efficiency of Si doping precursors will be much higher than that in the case of GaAs. This means that the adsorption/desorption process can quickly approach equilibrium. Si delta-doping concentration is therefore determined by the equilibrium between the adsorption and desorption processes with the desorption step limiting. This eventually leads to the abovementioned relationship between the electron density and the delta-doping time. 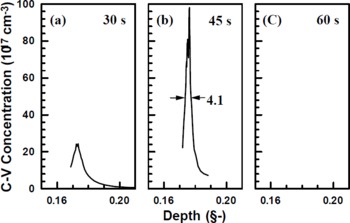 On the other hand, silicon dopants ideally should be confined to a single atomic monolayer by the growth interruption technique. However, the doping profile will be broadened by dopant diffusion and segregation processes. Usually, the broadening of the doping profile is estimated from the full width at half-maximum (FWHM) of the C-V profile. In the case of GaN, the diffusion process may significantly affect the broadening of the doping profile because the growth temperature of GaN is much higher than that of conventional III-V compound semiconductors. As can be seen in Fig. 2(b), however, the FWHM of the C-V profile in Si delta-doped GaN is as narrow as 4.1 nm. This sharp distribution profile is comparable with the values for Si delta-doped GaAs [Reference Schubert, Stark, Ullrich and Cunningham12]. It indicates that the diffusion effect is small for Si delta doping in GaN by low-pressure MOCVD. Using optimized growth condition, the delta-doping technique in GaN has the feasibility of the fabrication of high performance electronic and opto-electronic devices. 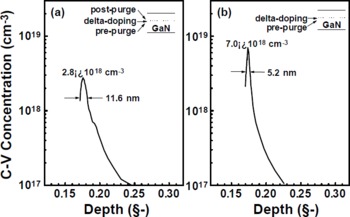 Si delta-doped GaN layers have been successfully grown by low-pressure MOCVD. From C-V measurement, we found that the delta-doping of Si in GaN has a dependence on deltadoping time that differs from that of Si delta-doping in GaAs and that it may be dominated by the desorption process of Si. Additionally, to obtain a higher Si delta-doping concentration, it is essential to utilize the delta-doping sequence that does not have a post-delta- doping purge step.

This work was partially supported by MSTK and by KOSEF through the Semiconductor Physics Research Center at Chonbuk National University, and by the Ministry of Education of Korea.