It is now a common understanding that Mg acceptors doped in GaN by metalorganic vaporphase epitaxy (MOVPE) are severely passivated with hydrogen in as-grown layers and can be activated to achieve p-type conductivity by post-growth thermal annealing in N2 atmosphere resulting in dehydrogenation. With referring the earliest reports by Nakamura et al. [Reference Nakamura, Mukai, Senoh and Iwasa1], the thermal annealing has been considered to be effective at a temperature sufficiently lower than the growth temperature, e.g., at 600 °C or slightly higher. Although the doped Mg acceptors are expected to be activated almost completely at the present annealing conditions, there have not been a sufficient number of reports investigating the activation processes and the possible defects induced by thermal damage during the annealing.

Mg-doped GaN layers of 1 μm in thickness were grown on sapphire substrates by MOVPE at around 1000 °C. The post-growth annealing was done either in N2 or H2 atmosphere at various temperatures between 600 and 1100 °C, being expected to result in dehydrogenation or (re)hydrogenation, respectively. The electrical characterization was done by temperature-variable Hall effect measurements with Van der Pauw samples, fabricated by evaporating Au/Ni electrodes. The AC-component of Hall voltage was detected under magnetic field modulation typically at 50mHz, which enabled the characterization of highly resistive samples as those with the resistivity of 108 Ω·cm. The simple one carrier analysis method has been applied for the calculation of hole concentration and hole Hall mobility from the Hall effect measurement data as a first approximation.

As-grown GaN:Mg samples have been subjected to thermal annealing in N2 atmosphere for 20 min at different temperatures. The Hall effect measurements were conducted after fabricating the Au/Ni electrodes. Figure 1 shows the temperature dependence of hole concentration and hole Hall mobility with the annealing temperature as a parameter.

With the annealing from 600 to 900 °C the hole concentration slightly increases from 1 to 6×1017 cm−3 at room temperature (RT). The increase of hole concentration values at lower temperatures may be attributed to occurrence of impurity band conduction [Reference Goetz, Johnson, Walker, Bour and Street3] which makes invalid to use the one carrier analysis method for calculating the actual hole concentrations. The Hall mobility at RT also increases with the annealing temperature. It is worth noticing that the mobility of 600 °C-annealed sample exhibits a plateau characteristics near RT, suggesting that the hole transport is severely suppressed by neutral impurity scattering. From these mobility data, it is speculated that the samples of insufficient acceptor activation (i.e., those annealed at lower temperatures) contain unfavorable scattering centers probably originating from Mg-H bondings.

On the other hand, for the samples annealed at 1000 or 1100 °C, which are higher than the growth temperature, the hole concentration decreases to mid-1016 cm−3. However, one of the noticeable results is that the mobility becomes higher than those annealed at 700-900 °C and exhibits the more well-defined lattice scattering characteristics in Hall mobility data, i.e., that is proportional to T −1.5 from 130 K to RT. The maximum mobility of the 1000 °C-annealed sample is 32 cm2/Vs at 130K, which is the highest value among those observed in all samples examined here. If the decrease in hole concentration of those high-temperature annealed samples is due to generation of defects such as nitrogen vacancies, as has been suggested in ref.[Reference Youn, Lachab, Hao, Sugahara, Yamashita, Naoi and Sakai2], the increased mobility and its lattice scattering characteristics cannot be explained.

From these investigations, it may be concluded that (i) with the higher annealing temperature up to the growth temperature more activation of acceptors proceeds and unfavorable scattering centers originating from Mg-H bondings decrease, and (ii) the annealing at the temperature higher than the growth temperature results in compensation but does not enhance the generation of scattering centers. In additions to those, it is seen that the mobility-temperature characteristics, where the mobility rapidly decreases below 200 K for all samples, are not different significantly irrespecive of different contribution of the impurity band conduction. This is probably because that the conduction at low temperatures is dominated by native crystallographic characteristics such as grain boundaries.

Figure 2 shows the low temperature (24 K) photoluminescence (PL) spectra of the annealed samples. The PL intensity decreases with the annealing temperature from 600 to 900 °C but in tern increases for 1000 °C, showing also no heavy degradation with generation of optical defects for the high temperature annealing. The change in the spectral shape may involve useful information on the phenomena occurred by the annealing, but the analysis has not been performed at present. 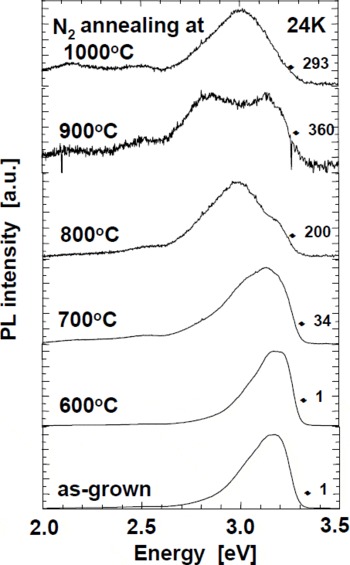 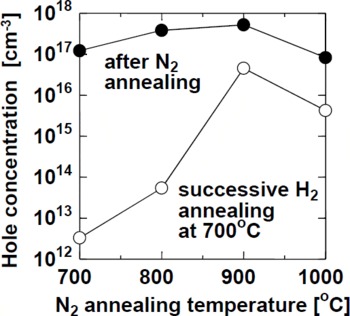 The temperature dependence of the hole concentration and hole Hall mobility is shown in Fig. 4. This re-dehydrogenation process again activates Mg acceptors in GaN and results in p-type conductivity. It should be noted that the sample experienced the previous dehydrogenation (1st N2 annealing) at 1100 °C showed the higher hole concentration and the higher Hall mobility compared to those at 900 or 1000 °C. The maximum mobility seems to be about 40 cm2/Vs at 100K, which is even higher than all samples shown in Fig. 1. This again evidenced that any compensation centers generated in GaN:Mg with annealing in N2 at 1100 °C do not seriously act as scattering or trapping centers and are almost inactivated by the successive thermal annealing treatments. 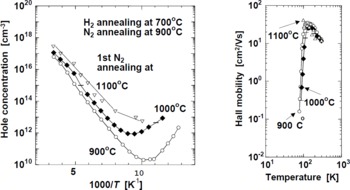 Successive dehydrogenation and hydrogenation of Mg acceptors in GaN have been done by N2 and H2 annealing, respectively, at different temperatures. For the dehydrogenation of as-grown GaN:Mg samples, the N2 annealing at higher temperatures in the region below the growth temperature results in increase of both hole concentration and mobility, showing more activation of acceptors and reduction in unfavorable scattering centers associated with Mg-H bondings. When the N2 annealing is higher than the growth temperature, the hole concentration reduces. However, the remarkable result is that the mobility gets higher. The GaN:Mg layer may be subjected to thermal damage which induces some defects and these defects compensate the acceptors, showing reduction in the hole concentration. But these defects cannot be severe scattering centers and inactivated by successive hydrogenation. Even if the GaN experiences thermal damage by high temperature annealing, it is not destructive and can be well recovered by appropriate hydrogenation/dehydrogenation treatments afterwards. The phenomena that thermally-induced defects do not severely affect the electrical properties is an another "stable nature of defects" in GaN crystals, similarly to the optical properties against dislocations.

This work was supported in part by a Grant-in-Aid for Scientific Research from the Ministry of Education, Science, Sports and Culture. The Hall effect measurements were conducted with the facility at Kyoto University Venture Business Laboratory (KU-VBL).