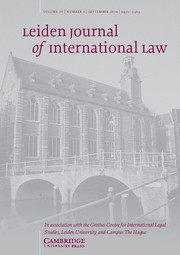 INTERNATIONAL LAW AND PRACTICE: Symposium on the Fight against ISIL and International Law