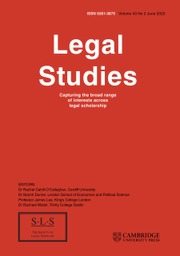 Precedent within the High Court

A number of Masters and a Registrar have recently indicated that, when exercising High Court jurisdiction, they are not bound strictly to follow prior decisions made by Judges in the High Court. This represents a notable departure from the position established by and within the High Court, where since the Judicature Acts of 1873 and 1875 an unquestioning obeisance of the Master and Registrar towards such decisions has been generally expected and offered. Delving into questions of power, authority and jurisdiction, and examining relevant legislation such as the Civil Procedure Rules, this paper constructs and analyses various arguments for and against recognising the co-equivalence of decisions of Judges, Masters and Registrars in the High Court.

I am grateful to Professor Goh Yihan and the anonymous reviewers for their comments which improved this paper. All errors are solely mine.

1 The present debate at least does not centre around lucre, tenure or judicial independence. Interesting issues relating thereto were recently canvassed in Australia and Canada; see Austin v Commonwealth of Australia (2003) 215 CLR 185; Masters’ Association of Ontario v Ontario (2011) 105 OR (3d) 196.

3 Although the High Court is presently operating with less than that number of puisne Judges.

6 It has been described that, before 1837, other court officials like clerks and prothonotaries did much of the work that would be performed by the common law Masters newly arrived on the scene: Bentham, RW and Bennett, JM ‘The office of prothonotary’ (1959) 3 Syd L Rev 47 at 53–54Google Scholar.

44 Re Cromptons Leisure Machines Ltd [2006] EWHC 3583 (Ch), [2007] BCC 214 at [5]. Nevertheless it is recognised that the same expense will possibly be incurred should the losing party challenge the decision in a higher court.

46 By way of comparison, in some civil law systems where trial courts may reopen apparently settled points of law, it has been observed that this ‘historically understandable stress on the need for every judge and court to exercise independent judgment rather than risk injustice under a kind of “cloak of superior orders” may in some settings lead to confusion, if literally dozens of precedents can be cited for the same point’: MacCormick and Summers, above n 2, pp 538–539.

53 Emphasis added. Compare this with r 2.5(1) of the Family Procedure Rules, which uses the phrase ‘perform any function’ (emphasis added). Note further that Registrars in Bankruptcy are covered by a third linguistic formula in the Insolvency (England and Wales) Rules 2016, SI 2016/1024, r 12.2(1). And the Admiralty Registrar has all the powers of the Admiralty Judge except where a rule or practice direction provides otherwise: CPR 61.1(4) (see generally also JA Kimbell ‘The Admiralty Registrar: past, present and future’ [2018] LMCLQ 413).

54 Practice directions are generally made by the Lord Chief Justice or a nominated judicial office holder and with the agreement of the Lord Chancellor (Constitutional Reform Act 2005 (c 4), s 13 read with sch 2; Civil Procedure Act 1997 (c 12), s 5).

74 At the peril of stating the obvious, a decision of a Master made in exercise of the High Court's jurisdiction is not necessarily equivalent to a decision of a High Court Judge for every other purpose, including of course the usual route of an appeal therefrom: the Master's decision is ordinarily appealable to a Judge, rather than to the Court of Appeal (as would have been the case were the first instance decision made by a Judge). For a perspective from New South Wales see Tomko v Palasty (No 2) (2007) 21 NSWLR 61 at [4] and [40].

75 Encompassing for this purpose the tribunals system, in which I consider for example the First-tier Tribunal and Upper Tribunal to be distinctly separate from each other.

80 As Professor Bronaugh stated, it is in the nature of binding precedents that they may control decisions without at the same time persuading, that is, convincing substantively: Bronaugh, R ‘Persuasive precedent’ in Goldstein, L (ed) Precedent in Law (Oxford: Clarendon Press, 1987) p 231Google Scholar.

81 It might perhaps be separately argued that costs and time would be much saved by loyal obeisance on the Master's part and by letting the parties take up the legal complexities on appeal. As has been observed, even Judges in the High Court, who are the resident happy larks, willingly fetter themselves by following the later of two conflicting first instance decisions if the second had considered the first (see text at n 41 above).

84 In Coral Reef the judge would of course have seen himself as defender and not attacker.

97 In Bentine v Bentine [2013] EWHC 3098 (Ch), [2013] 6 Costs LR 934 at [38], Proudman J believed (and it is fair to say that she would hardly be alone here) that a puisne Judge should always start from the proposition that the Court of Appeal was more likely to be right, and that it would be a brave judge who ventured to suggest that a Court of Appeal judgment was decided per incuriam.

100 As one realises today simply by asking the question, how many do not use electronic databases when hunting for authority or exposition on a point of law?

102 In their treatise The Science of Legal Judgment (New York: Baker Voorhis, 2nd edn, 1871) pp 299, 307 and 308Google Scholar, J Ram and J Townshend surveyed the authorities and opined only that a name ‘often augments the authority of a judgment, or opinion’; that a judge's particular quality or character may lead a judgment or opinion to ‘derive a peculiar weight’; that ‘the authority of a case may, moreover, be strengthened’; and that the case bear ‘augmented weight’, due to the learning of the judge or court. While the doctrine of stare decisis as we know it developed into full bloom only later, it is striking that Ram and Townshend were observing at the time how the courts were identifying and differentiating the appropriate weight to be placed on some judgments but not others.

103 Cassell & Co Ltd v Broome [1972] AC 1027 at 1054 and 1131. See also Bradley Phillips Pty Ltd v Burn Brite Lights (Vic) Pty Ltd [2002] SASC 145 at [20] (applying Proctor v Jetway Aviation Pty Ltd [1984] 1 NSWLR 166). There is another more generalised aspect of loyalty, that being loyalty to the rule of law, which Professor Waldron has mooted (J Waldron ‘Stare Decisis and the Rule of Law’ (2012) 111 Mich L Rev 1). Judges having to base their decisions on general norms and not leave them as freestanding particulars, he suggests that subsequent judges should then take note of the general norms that have been used, and play their part in establishing the norm as something whose generality is more than merely notional (eg by not distinguishing on flimsy grounds), all whilst maintaining the constancy and stability of the body of law that emerged from all this by not overturning precedents lightly or too often.

105 Coral Reef Ltd v Silverbond Enterprises Ltd [2016] EWHC 3844 (Ch), [2018] 4 WLR 104 at [61]. Much the same argument has been propounded (but with differing outcomes) in Singapore and Queensland (see, in Singapore, Peter Low LLC v Higgins [2017] SGHCR 18 at [27], and in Queensland, Lee, WC ‘The role of Masters in Supreme Court practice’ (1981) 11 Queensland Law Society Journal 115 at 123Google Scholar). And Simon Salzedo QC has written that ‘it is at least arguable that a rational system of stare decisis requires that the appellate relationship is a sufficient condition for binding effect’ (emphasis in original): S Salzedo ‘New precedent on precedent’ (available at www.linkedin.com/pulse/new-precedent-simon-salzedo-qc).

107 Another instance of binding authority and the route of appeal not being invariably linked is how Divisional Courts exercising criminal jurisdiction are generally thought to be bound by Court of Appeal (Criminal Division) judgments, even though it is to the Supreme Court that an appeal from the Divisional Court lies, with leave, under the Administration of Justice Act 1960, s 1 (see eg C v Director of Public Prosecutions [1996] AC 1 at 12–13; Morgans v Director of Public Prosecutions [1999] 1 WLR 968 at 979; Cross and Harris, above n 50, p 121; Morgan, P ‘Doublethink and district judges: High Court precedent in the county court’ (2012) 32 LS 421 at 427Google Scholar).

114 This argument might conceivably have applied in respect of the Masters since they were also affected by the track system, but the matter is now largely moot following the streamlining of the appeal avenues, pursuant to the Civil Procedure (Amendment No 3) Rules 2016, SI 2016/788; Access to Justice Act 1999 (Destination of Appeals) Order 2016, SI 2016/917; CPR Practice Direction Amendments (86th Update). For relevant background provided by Briggs LJ (as he then was), see his Civil Courts Structure Review: Interim Report (December 2015) paras 3.30–3.33; Civil Courts Structure Review: Final Report (July 2016) paras 3.22–3.23.

115 First appeals from the County Court to the Court of Appeal are now restricted to the circumstances set out in CPR 52.23(1) and the Access to Justice Act 1999, s 57.

119 Because the standard of review of such a decision was broadly similar whether before or after the introduction of the CPR. Under the old RSC Ord 58 r 2, an appeal from a Master's decision made at trial or on an assessment of damages would proceed with leave directly to the Court of Appeal. In an appeal against an assessment, for instance, interference with the exercise of discretion was warranted only if the damages had been assessed on a wholly erroneous basis (see eg Fielding v Variety Incorporated [1967] 2 QB 841 at 851 and 853, applying Davies v Powell Duffryn Associated Collieries Ltd [1942] AC 601). The other grounds for interference stated in Davies (at 617) would presumably have been applicable too, such as where the court below had acted on a wrong principle of law or misapprehended the facts. For the standard of review in the Court of Appeal after the CPR was introduced in 1998 (but before the latest 2016 amendments streamlining the appeal routes, mentioned at n 114 above), see Gorne v Scales [2006] EWCA Civ 311 at [56]; Earlrose Golf and Leisure Ltd v Fair Acre Investments Ltd [2009] EWCA Civ 1295 at [35].

125 Although the lack of an instructional manual accompanying the textual change left some slightly bemused; see Jolowicz, JA ‘The new appeal: re-hearing or review or what?’ (2001) 20 CJQ 7Google Scholar.

129 In an extra-curial essay, Sir Robert Megarry wrote that ‘Surely the law must be what the courts declare it to be, and not merely what the law reports decide to publish: a poor report, or no report at all, may make it difficult to discover what was said, and summary reports not prepared by barristers may have to be scrutinised with care, but a decision ought not to be rejected out of hand merely because there is no orthodox report of it’: Megarry, RE ‘Reporting the unreported’ (1954) 70 LQR 246 at 250Google Scholar.

132 The suggestion is nothing new but finds echo in Megarry, above n 129, at 251–252. Perhaps we may yet reap some benefit from all that technology.

Precedent within the High Court
×

Precedent within the High Court
×

Precedent within the High Court
×
×