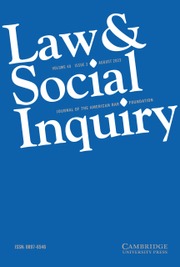 The Dilemma of Judicial Biography or Who Cares Who Is the Great Appellate Judge? Gerald Gunther on Learned Hand 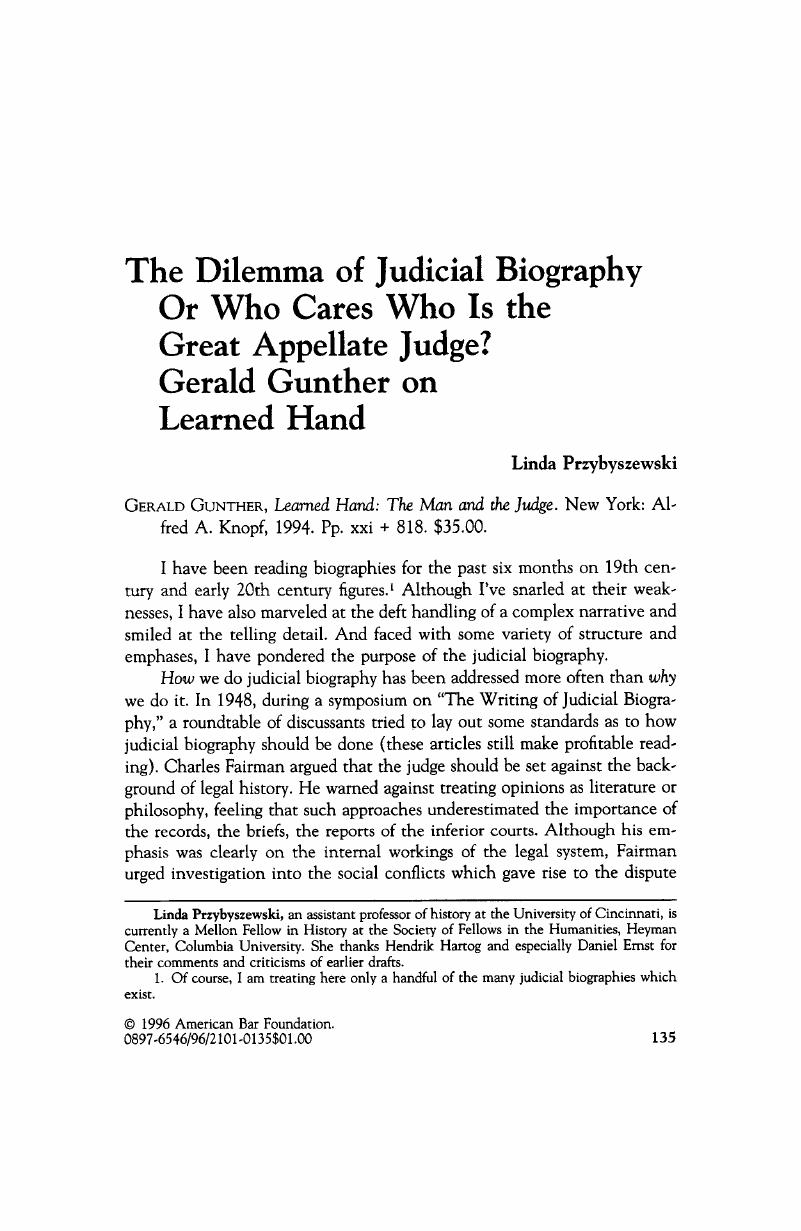 1 Of course, I am treating here only a handful of the many judicial biographies which exist.Google Scholar

8 Carl B. Swisher, Stephen J. Field: Craftsman of the Law 165 (1930; Hamden, Conn.: Archon Books, 1963) (“Swisher, Field”); or see this passage (at 239) He was a statesman-his enemies would have said a politician-as well as a judge. He gave weight to principles that were political, or economic, or moral, or religious, or all of these as well as those that were legal. In his use of legal principles he chose one type on one occasion, and another on another occasion. At one time he ranged widely for his evidence, and at another he narrowed his vision to the obvious meaning of legal phrases. Back of it all was the man who used principles and rules of evidence for the achievement of the ends which he thought most worth while.Google Scholar

19 Reid seems ambivalent at best when he finds Joseph Doe not anticipating economic change: “While Doe was Chief Justice, a New England conscience sat on the New Hampshire bench and in the name of nineteenth-century constitutionalism shielded the state from corporate domination, temporarily stemming the tide of monopoly, the demands of progress, and the inevitability of economic laws.” John Phillip Reid, Chief Justice: The Judicial World of Charles Doe 281 (Cambridge: Harvard University Press, 1967) (“Reid, Doe”).Google Scholar

35 Charles W. McCurdy, “Stephen J. Field and the American Judicial Tradition,” in The Fields and the Law (San Francisco: U. S. District Court for the Northern District of California Historical Society/Federal Bar Council, 1986): 15–19; “Justice Field and the Jurisprudence of Government-Business Relations: Some Parameters of Laissez Faire Constitutionalism, 1863–1897,” 61 J. Am. Hist. 970 (1975).Google Scholar

37 Id. at 208. See Levy, , Shaw 67, in dealing with claims for slaves for freedom: “in each instance his judgment approached impeccability. While his opinions as an individual perceptibly suggested the disposition of the case, they were shrouded by his solemn effort to decide fairly and in harmony with known legal principles.”Google Scholar

43 Gunther (at 162) sees Hand as taking part in this overpraising of Holmes.Google Scholar

55 Id. at 321; see similarly how Brodhead, Brewer, writes that Brewer “was not hostile to blacks” (at 107) yet acknowledges his “tortured reasoning” (at 157) in a civil rights decision. Brodhead's work indicates that Brewer believed in a clear racial hierarchy with whites followed by Asians followed by blacks.Google Scholar

59 The Historical Society of the U. S. District Court for the Northern District of California, for example, has undertaken such a project in cooperation with the Regional Oral History office of the Bancroft Library.Google Scholar

63 Holmes wrote: “Only when you have worked alone–when you have felt around you a black gulf of solitude more isolating than that which surrounds the dying man, and in hope and in despair have trusted to your own unshaken will–then only will you have achieved.” Quoted in White, Holmes 211 (cited in note 33).Google Scholar

69 Howe notes the economic connections of Holmes' mother (Howe, Holmes 1841–1870 at 30); King, Fuller 61–62, 65 (cited in note 32), makes clear that Fuller's wife was a source of both wealth and political power because of her father. See generally Davidoff, Leonore, Family Fortunes: Men and Women of the English Middle Class, 1780–1850 (Chicago: University of Chicago Press, 1987).Google Scholar

70 “The Story household, with its diffusion of authority, its tolerance, the egalitarian relationship of husband and wife, taught a republic lesson on authority.” Newmyer, Story 17.Google Scholar

71 See the self-mocking comments: “The fun of talking to women… was that they carried you away, so that you could express your innards with all the appropriate rapture, floating on the exquisite breath of your own egotism; reaching so far that suddenly you might look at her and say ‘by the way, my dear, what is your name?’“White, Holmes 31 (cited in note 33).Google Scholar

72 See, for example, Tinsley Yarborough on the first Justice John M. Harlan's alleged “rugged individualism” of frontier origins when he was in fact a Whig with family ties to Henry Clay, the man who came up with the political program of internal improvements called the American System. Yarborough, Judicial Enigma: The First Justice Harlan 182 (New York: Oxford University Press, 1995).Google Scholar

75 This book is too big because Gunther includes too much material. At the risk of appearing to be satirizing long biographies by writing a long footnote in a long review essay, I would argue that we don't really need to know every last detail of Hand's early efforts to join a law office, nor every passing idea he voiced on public issues. What's remarkable is that all these details are rendered in a well-organized volume and in graceful sentences. For example, Gunther writes this jam-packed but perfectly lucid sentence after identifying Max Eastman as the defendant in the famous Masses decision, and that Hand and he had met:. 77. Eastman also recalled later–after his politics had moved from support of the Russian Revolution to praise of Trotsky, staunch opposition to Stalinism, and ultimately an editorial post with Reader's Digest–that he had once lectured on ‘radicalism’ at the Colony Club, one of New York's exclusive women's clubs, and that Learned Hand (Perhaps at the urging of Mrs. Hand, a member) had introduced him. (At 154) The syntax is impressive, but we don't need to know all this. The same can be said of material found in the 100 pages of notes. My favorite ridiculous footnote (at 695 n. 103) identifies the parents of Mildred Mintum, the best friend of Hand's wife Frances Finke: Mildred's father, Robert Bowne Minturn, Jr., had bought the famous clipper ship Flying Cloud, which set several speed records. He died in 1889; her mother, born in 1839, lived until 1926. See Stein, Jean, Edie: An American Biography (New York: Alfred A. Knopf, 1982) (edited with George Plimpton), 21, 430. Edie is the story of Edith Minturn Sedgwick, a grandniece of Mildred Mintum, born in 1943, who died a suicide in 1971. Edie Sedgwick was an Andy Warhol groupie who appeared in several of his movies; she was a victim of the drug culture in that circle. The only possible explanation for how that got by the editor is the desire to plug another book published by Knopf.Google Scholar

78 The Warren era definition of greatness is undoubtedly responsible for the resurrection of the reputation of the first Justice Harlan whose dissents in favor of black civil rights and incorporation of the protections of the Bill of Rights through the Fourteenth Amendment were eventually adopted by the Court. Harlan only made it to a list of greats in 1958; see Bradley, Robert C., “Who Are the Great Justices and What Criteria Did They Meet?”in Pederson & Provizer, Great Justices 24–28 (cited in note 11).Google Scholar

79 Gunther at xvi; on obscenity see at 148.Google Scholar

80 Gunther at 47–48. Liberalism is also opposed to Langdell's “logic-chopping classifications and distinctions,” and “logically airtight unifying systems” (at 46, 50).Google Scholar

81 Compare this to G. Edward White's unconvincingly decided opinion in his Holmes biography that the Great Man did not have an affair with Clare Castleton despite the existence of letters of longing. With divorce so unacceptable amongst the Boston Brahmin, an affair seems a perfectly plausible way that Holmes might have coped with new passion. White, Holmes 239 ff. (cited in note 33).Google Scholar

82 Gunther writes in the last chapter (at 679): “By placing the highest value on inner development and personal fulfillment rather than earthly manifestations of success, [Frances] had avoided Mildred's agonized struggles.”Google Scholar

85 This kind of criticism is found in very different kinds of biographies as well, see King, , Fuller 125 (cited in note 32), but this is not the case in an introduction to a collection of selected Hand opinions: Hershel Shanks, ed., The Art and Craft of Judging: The Decisions of Judge Learned Hand 26 (New York: Macmillan, 1968) (“Shanks, Art and Craft”).Google Scholar

86 Frank, Law and the Modern Mind 34 (cited in note 121). Hand came to define the work of a judge as both an art and a craft, and compared his job to that of the poet or sculptor in a quotation from 1959, see Shanks, , Art and Craft xiii.Google Scholar

The Dilemma of Judicial Biography or Who Cares Who Is the Great Appellate Judge? Gerald Gunther on Learned Hand
×

The Dilemma of Judicial Biography or Who Cares Who Is the Great Appellate Judge? Gerald Gunther on Learned Hand
×

The Dilemma of Judicial Biography or Who Cares Who Is the Great Appellate Judge? Gerald Gunther on Learned Hand
×
×