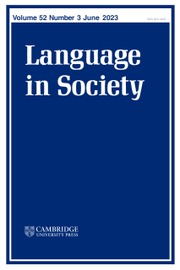 Haas's (1944) typology of nonreferential gender indexicality attested three basic varieties: speaker indexing, addressee indexing, and ‘mixed’ (or relational) speaker-addressee gender indexing. In an earlier publication in Language in Society this author adopted the same framework for the treatment of a large sample of cases of categorical gender indexicality. However, subsequent review of cases where gender indexicality seemingly interacts with sex-based semantic gender suggests that Haas' typology is incomplete. A relational speaker-referent indexing type is proposed. Focusing on gender indexicality in Chiquitano (Bolivia) and Yanyuwa (Australia), the author argues that these cases have been erroneously treated as systems in which speaker gender is indexed in the denotation of referent gender. It is shown that a more parsimonious analysis can account for these cases by means of a single purely pragmatic gender feature distributed over a relational speaker-referent indexical focus. (Gender, indexicality, deixis)*