Latest issue of Journal of the International Phonetic Association 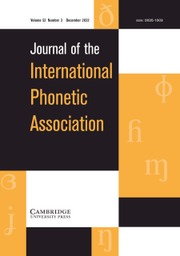 Illustration of the IPA