Latest volume of The Journal of Roman Studies 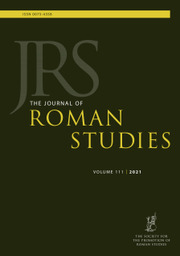 I. Literature and Reception