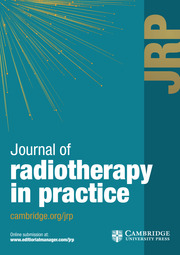 What Does the NRAG Report Mean for the Future of Radiotherapy in Britain?

By now, we hope you will have all read the National Radiotherapy Advisory Group (NRAG) report ‘Radiotherapy: Developing a World Class Service in England’, which was published by the Department of Health (DH) in May.1 For those of you who have not, the report is available on the DH website: (www.dh.gov.uk/en/Publicationsandstatistics/Publications/PublicationsPolicyAndGuidance/DH_074575). In addition, the sub-group reports, which were not initially published, are now available on the cancer action team website: www.cancer.nhs.uk/nrag-htm.

NRAG reports that due to previous underestimation of the need for radiotherapy services, there is a significant shortfall in capacity both in terms of radiotherapy equipment and staff, and this position is likely to deteriorate over the next decade. Therefore, recommending an increase in the amount of equipment and the number of staff forms the corner stone of the report, although it also looks at how existing resources may be used more effectively to improve productivity. However, what is clear from the report, and the DH’s response, is that such improvements, with one small exception, will not come with any central funding. As a result, there are tremendous challenges that need to be addressed if the recommendations are to be implemented, so that we can truly deliver a ‘world class radiotherapy service’ in this country.

Now that we are a few months down the line, and (hopefully) all the interested parties have had a chance to digest the report and assess its implications, two questions can be asked. First, how realistic are NRAG’s recommendations; and second, can they feasibly be implemented?

Concerns have been raised that the extent of underprovision of radiotherapy, both now and in the future, has been overestimated by NRAG. The work of the scenario sub-group, which modelled the requirements for fractionation, suggested that there is currently a 60% shortfall nationally. This equates to 54,000 fractions per million population served. This may seem unrealistically large to some observers, but it should be acknowledged that some radiotherapy centres are delivering 48,000 fractions per million population, whilst others are providing as few as 17,500, and so have much further to go. The achievements of the top performers would appear to validate the current estimates of demand, but as the population ages, cancer becomes more common and the requirement for radiotherapy will increase. Added to this is a likelihood that in certain cancer sites the indications for radiotherapy may change, and the number of fractions thought appropriate to treat some situation increases. Therefore, there needs to be a plan for 54,000 fractions per million population across the country by 2016.

In the National Health Service, we have become accustomed to managing the demand to fit available capacity, rather than planning and modelling for what we need, as NRAG has done. It is highly likely that there is an unrecognised and unmet need for radiotherapy already in existence; previously, clinical oncologists have grown up with a mind set of trying to deflect all but the most necessary cases for radiotherapy to avoid adding to already unmanageable waiting lists. Old habits die hard, but perhaps multidisciplinary teams across all networks should re-examine whether or not they are utilising radiotherapy appropriately. NRAG also acknowledges that travelling distance and time are barriers to patients taking up radiotherapy, and therefore supports the notion of new satellite services that can deliver treatment closer to patient’s homes.

If we assume that the work exists, how do we increase the resources needed to deal with it? First as we all know, it is not just a question of ‘kit’ and, indeed with the expansion of radiotherapy equipment of the last decade, the biggest barrier to providing a top class radiotherapy service has been shortages of key skilled staff, particularly radiographers and physicists. The NRAG workforce group has examined this problem and made a series of recommendations: these primarily relate not only to the implementation of the four-tier model and the review of skill mix within radiotherapy departments but also to improving training and reducing the attrition rate with initiatives such as VERT. This is a hybrid virtual radiotherapy training environment, which has been developed in Hull, for which £5 million has been allocated to make widely available. It is augmented by the creation of two dedicated radiotherapy skills laboratories, for hands-on training for all disciplines.

With the exception of the skills laboratories and VERT, there is no evidence that central funding will be forthcoming to support the necessary changes and expansion of services. Such changes include increasing the amount and quality of treatment equipment, improving access for patients to conventional radiotherapy and more specialised treatments such as proton therapy, which will be increasingly expensive.

So perhaps the biggest single question remains, how can the development of a world-class radiotherapy service in England be funded? Clearly, local commissioning bodies are going to have a major role to play. The NRAG report recommendations are likely to be endorsed wholeheartedly by the (about to be published) Cancer Reform Strategy, which will go some way in persuading primary care trusts, strategic health authorities and specialist commissioners that radiotherapy needs to be a high priority. There may also be a role for partnership with the independent sector, although this remains controversial, and many individuals have concerns about such a possible development.

So whilst we lobby our commissioners for more funding, await political developments about public–private partnerships, and anticipate the Cancer Reform Strategy details, what steps can we start to take? Realistically, before we can improve the radiotherapy services, we need to know where we are starting. Accordingly, the first step in implementing NRAG should be a benchmarking exercise, using the radiotherapy episodes statistics data (now the National Radiotherapy Dataset) so that each centre has an accurate, comparable picture of its current position and a sound base for future planning. Second, as has been indicated earlier, as most centres are failing to achieve the currently expected level of radiotherapy fractions delivered not only by population but also by treatment machine (NRAG recommends that 8,000 fractions per annum per linac, averaged across the service), efforts should be made to achieve this as soon as possible. Consideration needs to be given to increasing the number of fractions per hour, increasing the length of the average working day, weekend and bank holiday working, ensuring beam matching of linacs wherever possible and using a service continuity machine to maintain capacity as ways to achieve this target without massive investment.

Finally, national and local action plans will need to be produced with clear time lines and guarantees of financial support from either local commissioners, partnerships with the independent sector, central government or a combination of all three, to ensure that the vision of NRAG becomes a reality rather than an unfulfilled aspiration. All of us who care about the provision of radiotherapy, both now and in the future, must be prepared to contribute to this work to ensure that this opportunity is not wasted.

Radiotherapy: developing a world class service for England. Report to Ministers from National Radiotherapy Advisory Group.Google Scholar
You have Access

What Does the NRAG Report Mean for the Future of Radiotherapy in Britain?
×

What Does the NRAG Report Mean for the Future of Radiotherapy in Britain?
×

What Does the NRAG Report Mean for the Future of Radiotherapy in Britain?
×
×