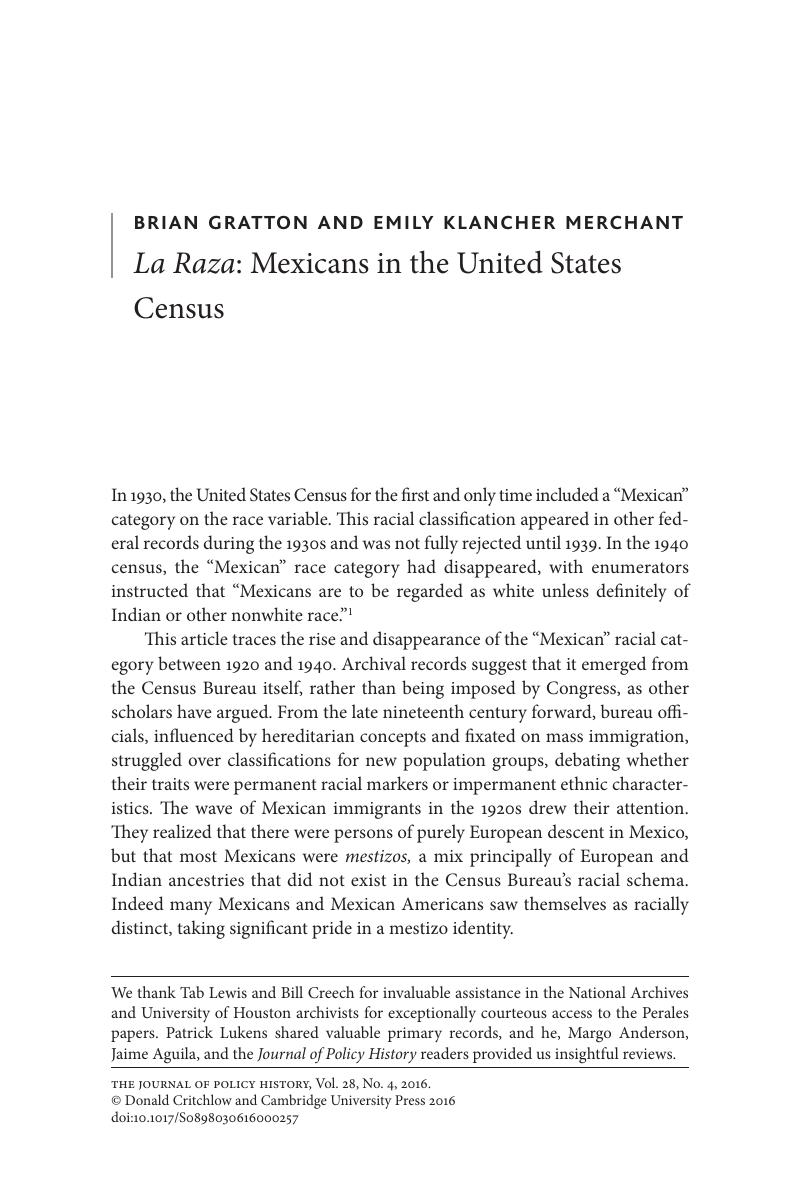 We thank Tab Lewis and Bill Creech for invaluable assistance in the National Archives and University of Houston archivists for exceptionally courteous access to the Perales papers. Patrick Lukens shared valuable primary records, and he, Margo Anderson, Jaime Aguila, and the Journal of Policy History readers provided us insightful reviews.

3. Francis A. Walker, “The Restriction of Immigration,” Atlantic Monthly, June 1896, 822–29. For Walker’s influence on the bureau, see folder “The Coming Census (1930),” box 147, Memoranda and Notes of Joseph H. Hill, 1905–1940, Record Group 29.4.2, Records of the Bureau of the Census, Records of the Office of the Assistant Director for Statistical Standards 1850 to 1990, Records of the Chief Statistician (hereafter Chief Statistician), National Archives, Washington, D.C. Willcox, Walter F., “The Development of the American Census Office since 1890,” Political Science Quarterly 29, no. 3 (September 1914): 438–59;CrossRefGoogle Scholar Anderson, Margo J., The American Census: A Social History, 2nd ed. (New Haven, 2015)Google Scholar, constitutes the standard source for the history of the bureau. Chapter 6, “The Tribal Twenties,” discusses Hill and other major figures. Paul Schor is attentive to Hill and to debates over racial and ethnic categories. Compter et classer: Histoire des recensements américains (Paris, 2009), 218–19, 223–26 (all translations from French and Spanish are by Brian Gratton); Schor’s “Mobilizing for Pure Prestige: Challenging Federal Census Ethnic Categories in the USA (1850–1940),” International Social Science Journal 57, no. 183 (May 2005): 89–101, provides select material in a translation from the French. Mai M. Ngai discusses Hill in Impossible Subjects: Illegal Aliens and the Making of Modern America (Princeton, 2014), 30–32.

4. Most recently in “Views of European Races among the Research Staff of the US Immigration Commission and the Census Bureau, ca. 1910,” Working Paper No. 648, Levy Economics Institute of Bard College (January 2011), http://www.levyinstitute.org/pubs/wp_648.pdf (accessed 13 April 2015).

14. Hochschild, Jennifer L. and Powell, Brenna Marea, “Racial Reorganization and the United States Census, 1850–1930: “Mulattoes, Half-breeds, Mixed Parentage, Hindoos, and the Mexican Race,” Studies in American Political Development 22, no. 1 (Spring 2008): 59–96 (81)Google Scholar. An example of the common use of its conclusions is Cybelle Fox and Guglielmo, Thomas A., “Blacks, Mexicans, and European Immigrants, 1890–1945, American Journal of Sociology 118, no. 2 (September 2012): 353.Google Scholar Reisler, Mark, By the Sweat of Their Brow: Mexican Immigrant Labor in the United States, 1900–1940 (Westport, Conn., 1976), 137.Google Scholar Anderson, The American Census, 156. Congressional demands might influence the bureau, but staff successfully resisted those they thought unreasonable. See the comments of the Chairman of the House Committee on the Census, the Hon. Hart Fenn, J., in “Provisions of the Census Bill,” Congressional Digest 8, no. 2 (February 1929): 45–64,Google Scholar and copious archival evidence in the records of the Census Advisory Committee. See, for example, folder “Minutes Joint Advisory Committee October 18 1929,” Minutes of Meetings Correspondence and Reports April 16 and 17, 1926, to October 1932. Records of the Bureau of the Census, Record Group 29.3.2, Entry 148, Administrative Records of the Bureau of the Census, Records of the Census Advisory Committee (hereafter Census Advisory Committee). See as well, U.S. Congress, “Western Hemisphere Immigration,” 18–19 April 1930, and folders “67102,” “67102 (Part 3),” “67102/8” “Fifteenth Census of Population,” and folder “75303/26–75315/29,” box 141. Record Group 40.2, General Records of the Department of Commerce, Office of the Secretary General, General Correspondence, 1903–50 (hereafter Commerce), National Archives, College Park, Md.

19. John M. Nieto-Phillips, The Language of Blood: The Making of Spanish American Identity in New Mexico, 1880s–1930s (Albuquerque, 2004); Brian Gratton, Emily Merchant, and Myron Gutmann, “Race and Deportation: Mexicans in the 1930 and 1940 Censuses,” paper delivered at meeting of the Science History Association, October 2008.

32. Edward J. Noble, Under Secretary, Department of Commerce, concluded in 1939 that “no objection was made to [racial classification] in the 1930s Census reports, either at the time these reports were issued, or for several years thereafter.” Noble to Secretary of State [Cordell Hull], 14 September 1939. Folder “67104–67104 (Part 1A),” box 141, Commerce. United States, President’s Research Committee on Social Trends, Recent Social Trends in the United States (New York, 1933).

36. Cutting’s biographer shows that the senator’s sympathies, as well as the votes necessary to his success, lay in the Hispanic population. Richard Lowitt, Bronson M. Cutting: Progressive Politician (Albuquerque, 1992), 171–72, 213, and 323.

39. Schor, Compter et Classer, 253–54. Such a defense had to maintain that Mexicans were not persons of color, who, under Texas and other state laws, could be or had to be segregated from whites. On this characteristically LULAC strategy, see Benjamin Marquez, LULAC: The Evolution of a Mexican American Political Organization (Austin, 1993), 32–33, and Craig Allen Kaplowitz, LULAC, Mexican Americans and National Policy (College Station, Tex., 2005). García, Mario, “Mexican Americans and the Politics of Citizenship: The Case of El Paso, 1936,” New Mexico Historical Review 59, no. 2 (1 April 1984): 187–204.Google Scholar

43. Folder “67103 (part 2),” box 141, Commerce. Although on leave, Roper wired Chávez on 14 October, assuring him that an investigation was under way. This folder contains the correspondence linked to Draper’s and Roper’s hurried telegrams of apology.

48. Schor cites Director of the Census to Dr. Halbert L. Dunn and a similarly emphatic message from Austin on 3 December 1936. Compter et Classer, 257.

51. The unsigned memorandum appears to be the work of Truesdell. Folder “Population, 1940,” box 6, Austin.

54. Secretary of State Henry Louis Stimson saw immigration restriction as serving only to “anger” Mexico and other Latin American nations. See [Stimson] to Lamont, 15 February 1930. Folder “75303/26–75315/29,” box 141, Commerce. In chaps. 3 and 4 of A Quiet Victory, Lukens demonstrates the State Department’s early opposition to restriction and the pro-Mexican orientation of Assistant and Under Secretary of State Sumner Wells and other State Department officials. His key argument for linkage to the race variable in the Andrade case is presented on pages 143–44; see, generally, chaps. 7 and 8. For the confusion of race and nationality in naturalization regulations, see the series by Smith, Marian L., “Race, Nationality, and Reality,” Prologue Magazine 34, no. 2 (Summer 2002): 91–105.Google Scholar

59. Patiño’s undated memorandum stated that his office received Daniels’s request on 22 November, after the decision was made. Lukens concludes that the Mexican experts did not fully support the idea of a separate classification, a view with which we disagree. See Lukens, A Small Victory, 168–69. Gamio had, by this time, become insistent that cultural markers be used to distinguish between indigenous, mestizo, and European groups. Loveman, National Colors, 236–37. His memorandum indicated this preference; since it could not be carried out in the United States, a racial category would be better than no distinction.

61. Lukens argues reasonably that its role in the Andrade case implies that the Mexican government would have rejected a racial category. Guglielmo shows that that government lobbied strenuously for antidiscrimination and “Caucasian” rights bills in Texas in the early 1940s. See “Fighting for Caucasian Rights.”

64. “Statistics and Politics: The ‘Hispanic Issue’ in the 1980 Census,” Demography 23, no. 3 (August 1986): 403–18 (406). Benjamin Francis-Fallon covers this political history more sympathetically in “Minority Reports: The Emergence of Pan-Hispanic Politics” (Ph.D. diss., Georgetown University, 2012). His account demonstrates the advocacy among certain Mexican American leaders of a racial category. See chaps. 5 and 10. For a fuller account of the attempt of minority groups to increase their counts in the census, see Peter Skerry, Counting on the Census? Race, Group Identity, and the Evasion of Politics (Washington, D.C., 2000).

66. Robbin, A., “Classifying racial and ethnic group data: The politics of negotiation and accommodation,” Journal of Government Information 27, no. 2: 129–56.Google Scholar Anderson discusses these lobbies in The American Census, chap. 10, “Census Undercount and the Politics of Counting,” esp. 230–33.

67. Douglas Weeks, O., “The Texas-Mexican and Politics of South Texas,” American Political Science Review 24, no. 3 (August 1930): 606–27.CrossRefGoogle Scholar Rosales’s “Shifting Self Perceptions” most eloquently describes the shift of perspectives between the generations.