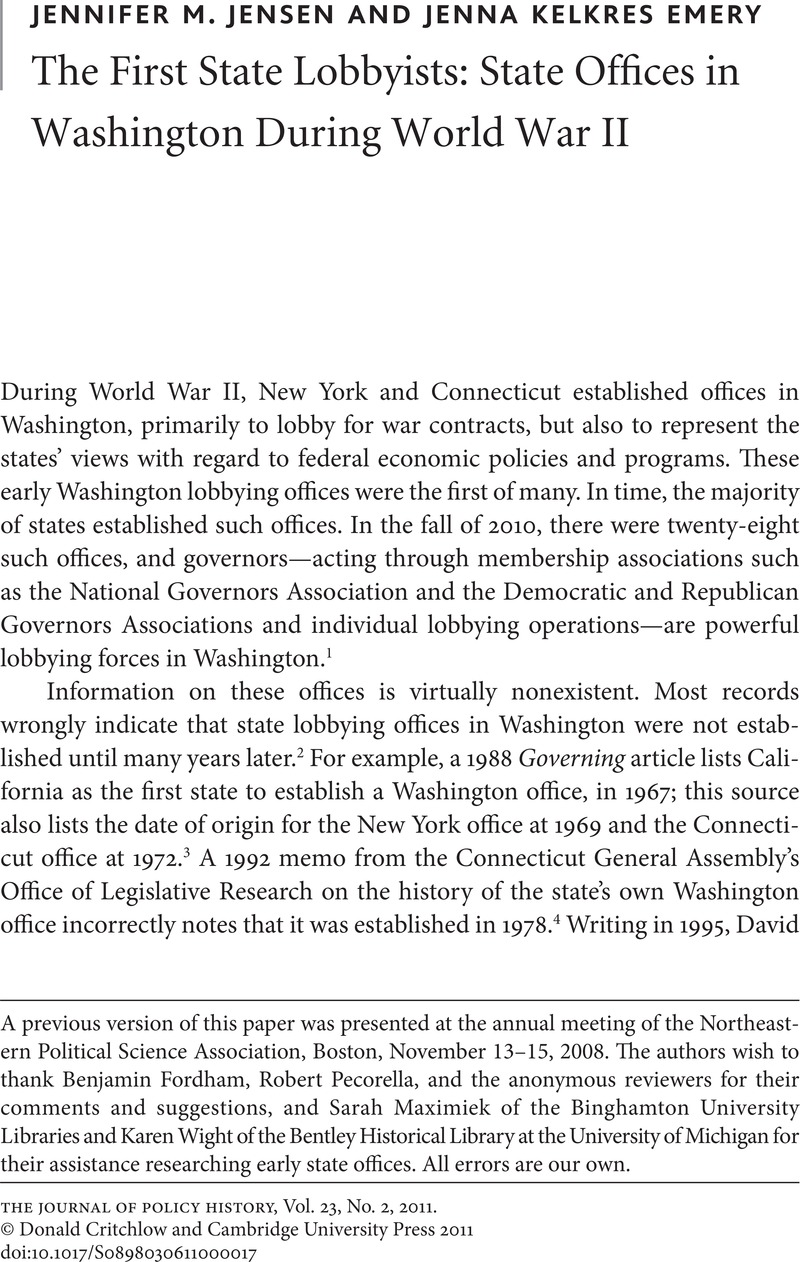 2. The only academic work that specifically and properly dates the origin of New York’s office in Washington at is an unpublished master’s paper. Jerry G. Udell, “The Governor’s Ambassador: A New Concept in the Representation of State Interests at the Federal Level” (Research Paper for 53.750, Seminar in American Government, American University, 1966). A few other works, such as a 1968 CQ Press guide, note that the New York office existed during World War II, indicating that the office was established in 1943 under Governor Dewey rather than Governor Lehman. Congressional Quarterly Service, Legislators and the Lobbyists, CQ Background (Washington, 1968)Google Scholar. Smith, Richard Norton, Thomas E. Dewey and His Times (New York, 1982)Google Scholar.

8. David Koistinen notes, “Historians have recently begun to explore public policy responses to industrial decline, although policymaking on this issue at the state level has received almost no attention.” Koistinen’s investigation of postwar Massachusetts is one exception to this gap in the literature. Koistinen, David, “Public Policies for Countering Deindustrialization in Postwar Massachusetts,” Journal of Policy History 18, no. 3 (2006): 326CrossRefGoogle Scholar.

10. The overwhelming bulk of the scholarship and popular literature on intergovernmental relations in the 1940s, or on state lobbying efforts more generally, do not mention these offices. We find it highly unlikely that even a handful of other states established their own offices during this time, if any established them at all. There are no references to early state lobbying offices in Brooks’s When Governors Convene. There are no references to other state offices during this time in the ACIR papers held at the National Archives, or in the historical papers held in the library of the National Governors Association. There is one reference to other states establishing Washington offices in the early 1940s; a 1942 Buffalo Courier-Express article states that “the success of the (New York) bureau is prompting other states to establish similar offices here.” This article could be referring to the Connecticut office, or to the Washington office of the Council of State Governments, which was established during this time. While we have not visited the state archives of the other forty-six states or reviewed the personal papers of each governor who served in these years, we have reviewed online research aids and queried reference librarians regarding the activities of other industrialized states and found no other additional references to Washington offices. While we expect that many more states lobbied informally for specific contracts, we believe that these efforts reflect a decidedly different type of commitment by their governors. Brooks, Glenn E., When Governors Convene: The Governors’ Conference and National Politics (Baltimore, 1961)Google Scholar. Buffalo Courier-Express Washington Bureau, “State Office Opens Doors to War Orders in Capital: Volgenau’s Staff Guides New Yorkers as Red Tape Baffles Many Contract Seekers,” Buffalo Courier-Express, 10 May 1942Google Scholar.

22. Walker, , Toward a Functioning Federalism. p.22Google Scholar. Walker notes that though the federal funds to states dropped during World War II, other federal spending picked up the slack, and further, categorizing the distribution of funds is difficult because it is difficult to differentiate between categories.

36. Connecticut’s WIC augmented the state’s Defense Council, which the governor had established in June 1940. Hurley spent a total of $50,000 on the WIC in 1942, 80 percent of which came from the governor’s contingency fund. Connecticut was not alone in establishing these sorts of organizations; by 15 February 1941, forty-six states had established a state defense agency of some sort. “Aid to Small War Firms Is Curtailed,” Hartford Courant, 16 June 1943Google Scholar. Council of State Governments, The Book of the States 1941–1942, vol. 4 (Chicago, 1941)Google Scholar.

37. Businesses and unions had expressed their concern about these businesses, and at an early WIC meeting, the governor stated that “there was danger of certain towns including Danbury and Shelton becoming ‘ghost towns’ because of the loss of markets, etc., of the fur hat and textile industries. “Minutes of Meeting between Gov. Hurley and Manufacturers, May 19th, 1942.” Connecticut State Archives, Robert A. Hurley Papers.

55. Writes Glenn Brooks, “The dominant faction within the Governors’ Conference firmly opposed the creation of a strong, activist group of governors. Most of all they were opposed to the suggestion that the governors should strive to influence national policy, either as a formal instrument of government or as an ad hoc pressure group.” Speaking to his colleagues at the January 1910 meeting of the Governors’ Conference, Governor Charles Evans Hughes said, “How the Federal administration shall be conducted is not a matter which concerns State Governors in their official capacity. Whether Congress shall pass a law or not, is for Congress to decide, and with respect to this it is the President’s prerogative to make recommendations.” President Taft came as a guest to that meeting, and indicated that he would stay out of conference affairs, and suggested that they meet away from Washington. This sent a message that they would not be interacting much with the federal government. Brooks, , When Governors Convene, 14–15Google Scholar. “Governors’ Conferences, Their Scope and Purpose,” speech by Governor Hughes. Charles E. Hughes, “Proceedings of the Second Meeting of the Governors of the States of the Union” (presented at the Governors’ Conference 1910 Annual Meeting, Washington, D.C., 18–20 January 1910).

57. Walker, , The Rebirth of FederalismGoogle Scholar.

69. Statistical Abstract of the United States, 1943 ed. Table 305, “Employees and Pay Rolls of State and Local Governments, by Type of Governmental Unit, by States: January 1942.”

78. Baack, Ben and Ray, Edward, “The Political Economy of the Origins of the Military-Industrial Complex in the United States,” Journal of Economic History 45, no. 2 (1985): 369–75CrossRefGoogle Scholar. Trubowitz, Peter, Defining the National Interest (Chicago, 1998), 31–95Google Scholar.

82. Since the Revolutionary War, the state had provided cannons, guns, rifles, aircraft fighters, aircraft engines, submarines, helicopters, and tank components for the nation’s war efforts. Connecticut had supplied 54 percent of the nation’s munitions during World War I, and during World War II Bridgeport was known as the “arsenal of the free world.” The Pratt & Whitney Aircraft Company was in East Hartford; Sikorsky Aircraft was based in Bridgeport; and the Electric Boat Company had its headquarters and shipyard in Groton. These defense products were directly linked to the unemployment rate in the state, and during World War II the state’s unemployment rate fell to one-half of one percent. David Pinsky, “Defense Contracts and the Connecticut Economy” (Storrs, Conn.), 4; Cavanaugh, Jack, “State Seeks Ways to Retain Manufacturing Companies,” New York Times, 10 April 1988Google Scholar; Roth, Matthew, Connecticut: An Inventory of Historic Engineering and Industrial Sites (Washington, D.C., 1981)Google Scholar.

83. In addition, other states perceived a “competitive threat” after seeing their counterparts flourish as a result of the war manufacturing boom. Koistinen, “Public Policies for Countering Deindustrialization in Postwar Massachusetts.” The South and the West were the ultimate beneficiaries. Hooks, Gregory and Bloomquist, Leonard E., “The Legacy of World War II for Regional Growth and Decline: The Cumulative Effects of Wartime Investments on U.S. Manufacturing, 1947–1972,” Social Forces 71, no. 2 (1992)CrossRefGoogle Scholar; Nash, Gerald D., The American West Transformed: The Impact of the Second World War (Bloomington, 1985)Google Scholar.

98. Michigan governor Murray Van Wagoner, a Democrat, who served from 1941 to 1942, spoke about this in a speech to his colleagues at the Governors’ Conference annual meeting in 1942: “Government has had a place in this war—a vital place. But no government agent ever got a contract placed, or a job of production finished. The best way to get war orders is to get production and technical engineers together, representing buyer and potential seller. In Michigan, we advised our manufacturers to go right to the government purchasing men, whether they be military or civilian. Or better yet, go right to the prime contractor, and find out what sub-contracts are available, and get the engineers together to find out what their plants could handle. No meeting of non-technical officials ever placed a war contract.” Van Wagoner, Murray D., “Operating the Tool Shop of America,” Vital Speeches of America 8 (1942), 662Google Scholar.

100. Moving to the Senate was unusual at this time; fewer than one in five governors did so after leaving the governor’s mansion.