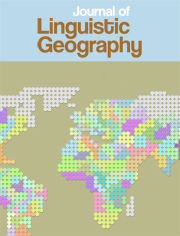 With this first volume we are pleased to announce the appearance of the digital Journal of Linguistic Geography. Our goal is to open the flow of linguistic analysis using digital formats most congenial to the internet in a field that has long been blocked by technical factors.

In no other field is the gap between the gathering of data and the analysis so great. The stacks of our libraries are filled with magnificently conceived and executed atlases of linguistic geography. File cabinets throughout the world are filled with papers that have never appeared in print, faced with the problem of reducing maps to miniature black-and-white versions that convey only a small part of the information in the original.

Many linguistic atlas maps are extended across a hundred centimeters of the printed page, with detail that is lost in the versions compressed in print journals. There will be no limit on the size of maps submitted to the Journal of Linguistic Geography; they will be able to be viewed in their entirety by panning and zooming operations that are second nature to users of the internet.

Color is as fundamental as size in cartography. For reasons that are not yet clear to us, the eye recognizes patterns of color far more readily than patterns of shapes. A red square isolated in a field of blue squares will be perceived instantly, while an isolated black square in a field of black circles on a white page may not be recognized at all. But in digital publication, color is no more difficult or expensive than black-and-white.

Even more crucial to analytical reading is the relation between map and text. In printed journals, this often requires a back-and-forth paging operation that challenges memory, and often leads to the reader accepting (or rejecting) the author's statement without making a point-by-point inspection. In the Journal of Linguistic Geography, maps and figures can float above the text, and allow the reader to make a direct comparison between what is said about the map and what it shows.

A further advantage of the Journal of Linguistic Geography format is the option of embedding and playing sound samples in the digital page. Such sound samples will not replace IPA notation, but rather serve to refine and encourage the use of phonetic notation.

We are pleased to announce that Dr. Bartłomiej Plichta is the Technical Editor for the Journal of Linguistic Geography. All authors will consult with him after review, and decide with him what graphic and audio formats will be used.

Reading this first volume will also show that the technical innovations presented in the Journal of Linguistic Geography are not confined to modes of display. New developments in the mathematical analysis of spatial patterns are strongly represented, and authors will be encouraged to present them in a form best suited for replication and confirmation. This may include the submission of substantial appendices, since the space limitations of print journals do not apply.

You most likely are reading this document on a screen. You may have formed the habit of first printing documents on paper since you find reading print is easier. If so, the Journal of Linguistic Geography papers will help you break this habit: These are documents that you don't want to print out!

To put it simply, linguistic geography is concerned with the spatial differentiation of linguistic forms. This is a matter of remarkable interest. Teachers of introductory linguistics find that students are fascinated with the fact there are regions nearby where speakers use ‘X’ to refer to what is (“rightly”) called ‘Y.’ This fascination with the facts of the matter impedes rather than encourages the development of our field as a branch of linguistic science. Our journal hopes to mobilize those facts in pursuit of a better understanding of the nature of language structure and language change. Our interest is focused on those connections within language that reflect the impact of a given change on other members of the system. A submission that traces distribution of isolated forms or sounds will receive our full attention when it is woven into the fabric of relations that turn words into language.

That is not to say that we disprefer studies of the lexicon. Rather we encourage authors to display the use of a form against the background of competing and complimentary forms. Thus we would hope to see (in Weinreich's terms) both semasiological maps alternating with onomasiological maps, showing what meanings are found for a given form as well as what forms are found for a given meaning.

We invite studies of the perception of speech as well as production. We are interested in both how linguistic varieties across and within regions are heard and processed and how nonlinguists perceive the spatial distribution of varieties, particularly when such studies shed light on the linguistic and social characteristics of language variation and change.

Thus the fact that we are named the Journal of Linguistic Geography is not without significance. But the linguistics we appeal to is not confined to the internal relations of linguistic forms. It is a linguistics outwardly defined to include the social, historical and economic contexts in which language is formed and used. Thus we expect to find maps reflecting population growth and movement, out- and in-migration, political trends and voting records as well as highway and railroad networks.

We are happy to announce that The International Conference on Methods in Dialectology has named the Journal of Linguistic Geography as one of its official publications. Its next meeting will be in Groningen, The Netherlands, August 11-15, 2014.

In this first volume we also would like to introduce you to our Editorial Board, a group of distinguished linguists from throughout the world whose own work often illustrates the sort of research we hope to feature in the Journal of Linguistic Geography. To that end, we have added after each Board member's name a reference to one of their exemplary articles as a guide to the scope and quality of work we will feature in this journal.

Lexical diffusion and the regular transmission of language change in its socio-historical context. 2011. In J. M. Hernández-Campoy (ed.), The handbook of historical sociolinguistics. Oxford: Wiley-Blackwell Publishing, 408–426.