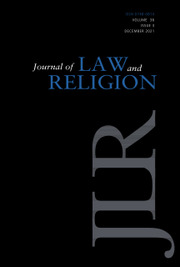 Book Review Symposium on Sovereignty and the Sacred