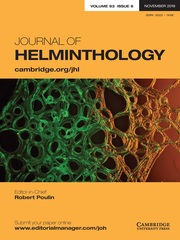 Parasite distribution among hosts is a fundamental aspect of host–parasite interactions. Aggregated parasite distributions within and across host species are commonly reported and potentially influenced by many factors, whether host or parasite specific, or related to host–parasite encounter and compatibility. Yet, the respective role of each in observed parasite distributions are often unclear. Here, we documented the distribution of the acanthocephalan parasite Pomphorhynchus laevis sensu lato (s.l.) in two replicate fish host populations. Aggregated distributions were observed in both populations, within and across fish host species. We found a positive abundance–prevalence relationship across fish species, suggesting that resource availability (fish host biomass density) was the main driver of P. laevis s.l. distribution. This was supported by further positive associations between mean parasite load and fish biomass density. We found little evidence for intensity-dependent regulation within host (i.e. intra-host competition among co-infecting parasites). Furthermore, P. laevis s.l. infection had no detectable effect on fish condition indices, except on the body condition of female barbel (Barbus barbus). Therefore, P. laevis s.l. tended to accumulate with size/age within fish species, and with fish biomass density among fish species, with apparently negligible limitations due to intra-host intensity-dependent regulation of parasite, or to parasite-induced morbidity in fish. The relative availability of final hosts for trophic transmission thus appears to be the main driver of P. laevis s.l. distribution among fish.

Both authors contributed equally to this work.