Biaxial compression tests on glacier ice with bubbles revealed that elongated air bubbles were developed with long axes in the direction of free expansion. The elongated bubbles were not only derived from spherical bubbles but also created by the healing of cracks that were developed during compression. Formation of elongated bubbles and foliations in natural glacier ice are discussed here in the light of results obtained experimentally.

Reference Nakawo [i.e. Nakao]Nakawo (1976) observed in a debris-covered glacier in the Nepal Himalaya that elongated bubbles were present not only near the active terminus but also over a wide area extending from an ice fall to the terminus. Their orientation near the terminus was consistent with those mentioned in many other reports. At the base of the ice fall, however, it was found that the elongated bubbles were almost vertical in orientation.

The purpose of the present paper is to show how elongated air bubbles are created in ice that is subjected to biaxial compression and hence to explain the observed distribution and orientation of elongated bubbles in natural glacier ice.

An ice block, containing only spherical bubbles, was cut out from core samples taken from Heitō Glacier, East Antarctica (Reference Nakawo [i.e. Nakao], Tanaka and KuroiwaNakawo and Tanaka, 1974). Thin rectangular specimens, 4 cm X 4 cm in the xy plane and 0.4 cm in the z direction, were prepared from this block for the experiments.

The experiments were performed in a temperature range of — 1 to — 2°C. The cross-head speed of the testing machine applying the compressive load was 10-4 to 10-5 cm/s. 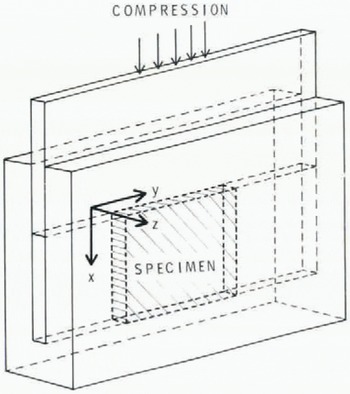 As the specimen was compressed, the spherical bubbles began to elongate in the y direction with a deviation of ±30°. This deviation seems to be dependent on the optic-axis orientation of the crystals in which air bubbles were contained.

Two types of crack were observed during the experiments. One type appeared at the first stage of the compression at fast cross-head speeds (c. 10-4 cm/s). These were initiated at an air bubble, without any preferred direction. The other type consisted of rows of small cracks in the y direction with deviation of ±30°. The long axis of each crack was in the direction of the row, i.e. in the y direction with a deviation of ±30°. The perpendicular to the plane of the cracks tended to be in the direction of the compression. These cracks became visible gradually as compression proceeded (at a later stage than the former type). They were observed in all of the experiments.

The deviation in orientation both of the elongated bubbles and of the latter type of cracks decreased with increasing strain. The orientation became almost parallel to the y direction (±10°) when 40% strain was reached. Similar results were reported by Reference MinoshimaMinoshima (unpublished) when a uniaxial tension was applied to an artificially-made bubbly ice. Bubbles were elongated in the direction of application of the tension as the deformation proceeded.

Figure 2 shows an example of a specimen before and after compression (the former type of cracking did not occur in this sample). It may be seen that most of the spherical bubbles were laterally elongated. The average axial ratio of the elongated bubbles was 3.8±0.9, without discernible dependence on bubble size. This value of the axial ratio was significantly larger than that of the strain ellipse for the deformed specimen, which was 2.2. Reference Kamb, Heard, Heard, Borg, Carter and RaleighKamb (1972) also reported that the degree of bubble flattening observed in his torsional experiments of snow-ice was somewhat larger than that expected from the bulk strain of the specimen. 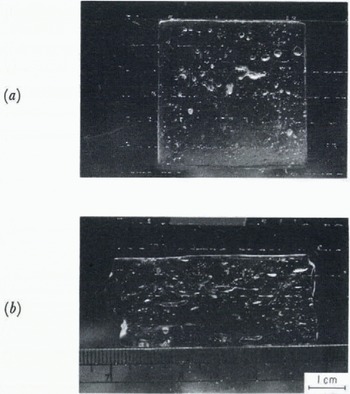 Reference GayGay (1968) developed a theory on the discrepancy between the strain ellipse of a deformed material and the shape change of foreign material embedded previously in the host material, assuming that both materials were Newtonian fluids having different viscosities. For an initially circular particle,

where, A and B are axial ratios of strain ellipses of embedded material and host material respectively, and R is the viscosity ratio of the materials. In this equation, taking the value of viscosity of air as zero (i.e. R ═ o), and the value of axial ratio of strain ellipse of ice as 2.2, then the axial ratio of the elongated bubble comes to 3.7. This value agrees well with the measured value of 3.8. This agreement is rather surprising since ice is not a Newtonian fluid but a crystalline material.

Figure 3 shows one of the second type of elliptical cracks developed in the specimen. The surface of the crack was normal to the compressive axis and the long axis was almost parallel to the direction of free expansion (y-axis). It appeared that some of the elliptical cracks started from small spherical air bubbles, but others were initiated spontaneously within crystals. It was difficult, however, to identify clearly the origin of individual cracks. 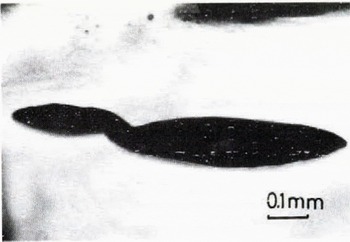 Fig. 3. The second type of cracks. Main compression axis is vertical in direction.

In the present experiment after reaching about 40% compression, the sample was subjected to isothermal annealing for about one day at ooC. As seen in Figure 4, cracks created by the compression changed into tabular bubbles and some of the cracks healed. The axial ratio of elongated or tabular bubbles thus formed was much larger than that of the elongated bubbles formed during compression. Simultaneously many small spherical bubbles appeared, forming a series of rows as shown in Figure 5. The formation of rows of small bubbles is thought to be due to the original cracks. Reference Muguruma, Muguruma, Mae and HigashiMuguruma and others (1966) have reported the formation of rows of cavities or continuous cracks within a single crystal of ice subjected to non-basal glide. It is considered, however, that the mechanism of the formation of rows of small bubbles during annealing is different from that for the non-basal glide experiments. 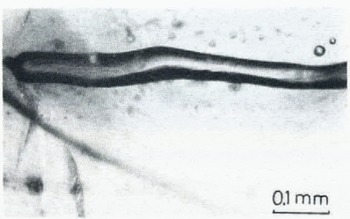 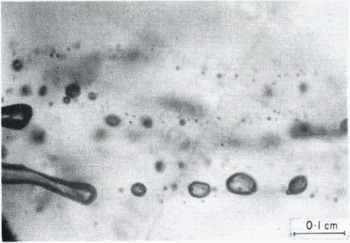 Variation in axial ratio of the bubbles

Elongated bubbles found in glacier ice have a range of axial ratios although the orientation of their long axes is relatively constant. In a biaxial compressive experiment, the elongated bubbles were almost parallel in orientation to the tensile direction (the y direction), which would correspond to the vertical direction at the base of the ice fall.

Variation in axial ratio was also observed in the experiments. For elongated bubbles developed from spherical ones, the variation was established to some extent (ranging from 2.4 to 5.1). This may be due to the variation of the angle between the flow direction and crystallographic orientation of individual host crystals of each bubble, although the orientation of the crystals also changed with time. Elongated or tabular bubbles formed from the healing of cracks had a much larger axial ratio than those formed from elongated bubbles created by mechanical deformation. The simultaneous occurrence of these two mechanisms could cause a large variation in the amount of elongation in natural glacier ice.

Elongated bubbles, once formed, could be further elongated by subsequent deformation. The elongation rate would be dependent on the ratio of the primary and secondary axes and the local strain. Since axial ratio of an elongated bubble formed by mechanical deformation in this experiment seemed to have no dependence on bubble size, the rate of the further elongation would also be independent of size.

Surface tension, however, caused morphological changes in the tabular bubbles during long periods, tending to make them more spherical in shape. The rate at which individual bubbles return to a spherical shape depends on their volume (Reference Nakawo [i.e. Nakao]Nakawo, 1977). If the initial axial ratio is the same, a large bubble changes into a spherical one at slower rate than a smaller one. This would explain the condition found by Reference Hudleston, Saxena and BhattacharjiHudleston (1977) that larger bubbles had a greater axial ratio than smaller ones in natural glacier ice.

Because of the counteracting effect of elongation and a return to spherical shape, there could be a critical size of spherical air bubbles, below which no elongation occurs. This condition could depend on the local strain-rate and temperature. It was found in several glaciers that most of the spherical bubbles that coexist with elongated bubbles were comparatively small in volume (Reference Hudleston, Saxena and BhattacharjiHudleston, 1977; Nakawo, in preparation).

When explaining the tendency for smaller bubbles to be more spherical, one should also take into account the phenomenon that tabular bubbles having a small diameter sometimes split into several fine spherical bubbles as the result of reduction of the surface energy (Reference Maeno and ŌuraMaeno, 1967; Reference Nakawo [i.e. Nakao]Nakawo, 1977).

The experimental results provided an explanation of the relation between bubble orientation in ice and glacier movement. The vertically oriented elongated bubbles found at the base of the ice fall of the glacier studied in the Nepal Himalayas, would be created by the strong longitudinal compression. Once formed, they were deformed subsequently in proportion to the increasing strain in ice (Reference Nakawo [i.e. Nakao]Nakawo, 1979).

The experimental results suggested that biaxial compression could also cause the foliation in glaciers. This would explain its vertical orientation normal to the flow at the base of an ice fall. Once formed, the foliation would be deformed passively owing to differential movements within glacier ice (Reference Allen, Allen, Kamb, Meier and SharpAllen and others, 1960; Reference Hooke and HudlestonHooke and Hudleston, 1978; Reference Nakawo [i.e. Nakao]Nakawo, 1979).

The authors are grateful to Mr H. Narita of the Institute of Low Temperature Science, Hokkaido University, for the use of his straining device. They are also indebted to Professor D. Kuroiwa of the Institute, and Dr L. W. Gold of the Division of Building Research, National Research Council of Canada, for critical reading of the manuscript and for giving many valuable comments. Thanks are extended to the members of the Applied Physics Section of the Institute for helpful discussions.

Fig. 3. The second type of cracks. Main compression axis is vertical in direction.