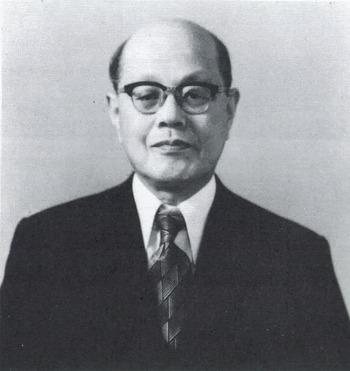 A distinguished scientist of snow and ice in Japan, Daisuke Kuroiwa, passed away in Sapporo on 28 October 1983.

His relapse of stomach cancer and subsequent hospitalization forced him to cancel his plan to leave Sapporo one month later for Hamburg to attend an IUGG meeting held in the summer of 1983. Defying every possible medical treatment and the utmost tenderness of his wife, son, and daughter in nursing the patient, the illness developed so quickly that his life was carried off within 3 months at the age of 67. This tragic news ran fast not merely through Japan, but also over the world and was received by many friends with great astonishment and bitter grief.

He was born on 6 September 1916 in Kochi Prefecture of Shikoku island on the side of the Pacific Ocean which enjoys a warm climate even in winter. So it is natural that he had the minimum knowledge of snow and ice problems in his boyhood.

After having completed the physics course of the Tokyo College of Science, the forerunner of the present Science University of Tokyo, in 1940, he was employed as a research scientist by the Electrotechnical Laboratory of the Ministry of Communication, where he joined a research group in developing the first electron microscope in Japan.

In 1943 he moved to Sapporo at the invitation of the late Professor Nakaya. Previously, the Institute of Low Temperature Science was founded at Hokkaido University under the leadership of the late Professor, who had conducted a series of experimental studies on the artifical production of snow crystals in a cold laboratory. Immediately after the establishment of ILTS, World War II broke out, obliging all members of ILTS to become associated with two war-related projects: prevention of icing on aircraft and the dissipation of natural fog.

The reason why Nakaya invited Kuroiwa to come to Sapporo to join his group as a member of ILTS was that he wanted to use the newly developed electron microscope for the study of condensation nuclei of fog particles in connection with his research projects. No sooner had Kuroiwa moved here than he launched out on this venture. He succeeded in it and in early 1945 he published the first paper on the electron-microscope studies of condensation nuclei of sea fogs. Despite the lack of international recognition of this paper, this work is worth being remembered as an unprecedented success in the direct observation of condensation nuclei under the electron microscope.

Having had experience of neither climbing up nor Sliding down snow-covered slopes on skis, he endured great hardship on Mount Ni seko-a n-nupuri, 1308 m above sea-level, where he had to conduct field experiments at the summit in winter. Just as the group began obtaining excellent results on the mechanism of Icing on aircraft wings and propellers, as well as on deicing techniques, the war came to an end and so did the projects. The post-war disruption and confusion followed and Japanese scientists began suffering from difficulties in obtaining support for research. In spite of this, Kuroiwa continued to pursue his work on condensation nuclei, for which he was awarded a prize by the Japanese Meteorological Society in 1955.

In the 1950s and early 1960s, several research projects of ILTS concentrated on the physical properties of deposited snow under the leadership of Professor Z. Yoshida. Kuroiwa’s study of the dielectric properties of snow and ice was then rewarded by the receipt of a doctorate from Hokkaido University in 1953. Another important contribution he made in those days was his ingenious experimental studies on viscoelastic properties of snow. His subsequent studies included such subjects as ice sintering in connection with metamorphism of snow, internal friction of ice, and chemical etching of ice in conjunction with dislocation densities and the movement of dislocations in ice crystals. Later, in 1967, he received a prize from the Japanese Society of Snow and Ice for his study on ice sintering in relation to metamorphism of snow. The work on the internal friction of ice is generally considered to be one of his finest contributions to glaciology.

Given a grant by the Snow, Ice and Permafrost Research Establishment of the U.S. Army (SIPRE) in 1960 as a visiting scientist, he lived for one year with his family at Evanston near Chicago. Then he was transferred to Hanover, New Hampshire, to work at the new building of the Cold Regions Research and Engineering Laboratory (CRREL), where his achievements were marked by several papers, including a chapter for the monograph, “Snow as a material”. While staying in the U.S.A., he participated in a snow and ice symposium held at MIT and presented a paper on “Studies of ice etching and dislocation etch pits”. Later he also visited Greenland where he was fascinated by the immense mass of snow and ice of the ice sheet. After having returned to Sapporo in 1963, as professor of the Physics Section of ITLS, his field of research expanded into various topics of snow and ice, including metamorphism of air bubbles in snow, liquid permeability of snow, grain-boundary energy in ice, snow and ice accretion on power lines, kinetic friction in snow and ice in connection with the snow conditioning of the down-hill and slalom courses of the 1972 Winter Olympic Games held in Sapporo, and so forth. In the summer of 1972, he observed McCall and Mendenhall Glaciers, and the Juneau Ice Field in Alaska, to study the physical processes of transformation from snow to ice under the U.S.—Japan scientific co-operative programme. For him the glacier was a source of endless enquiry into the unknown and amusement as well, in particular, when he was collecting samples of sand and silt on the ice for investigation under the scanning electron microscope.

From 1975 to 1980, he served as Director of ILTS. He also served the Japan Science Council as Chairman of the National Committee on Snow and Ice, and the Japanese Society of Snow and Ice as President of its Hokkaido branch. At that time, his additional duties covered various international organizations, such as Council member of the IGS (1973–76), Vice-President of ICSI (1980–83), and member of the Editorial Board of Cold Regions Science and Technology (1979–83).

After he retired from Hokkaido University in 1980, he was invited to become a professor of snow and ice engineering in the Civil Engineering Department of Hokkaido Institute of Technology, a private engineering college in Sapporo, in which he continued teaching and research work. Co-operative studies with ILTS on microwave characteristics of snow were pushed forward in conjunction with the remote sensing of a snow cover under the leadership of Kuroiwa for several years. In the summer of 1983 he planned to present his paper on the propagation of microwaves through a snow cover at the International Symposium on Hydrological Applications of Remote Sensing and Remote Data Transmission held at the IUGG General Assembly, but unfortunately he had to cancel it because of his illness.

He was always a quiet individual, friendly and helpful to others, everyone finding him easy to talk to. Participants from abroad in the 1966 International Conference on the Physics of Snow and Ice held in celebration of the 25th anniversary of the founding of ILTS will always remember his pleasant home and the warm welcome from his charming family.

Many friends from all over the world who attended the 1984 IGS Sapporo Symposium felt a sense of sadness at his sudden death which deprived them forever of his amiable company.