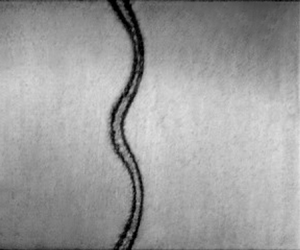 The shock-induced evolution of a gas layer with two fast/slow interfaces is investigated theoretically and experimentally. Specifically, the gas layer is located between a lighter gas and a heavier gas, forming a light/medium/heavy (LMH) configuration. Linear stability analysis is utilised to derive a new analytical model to quantify the Richtmyer–Meshkov instability (RMI) on the two interfaces of such an A/B/C-type fluid layer. Three quasi-one-dimensional (1-D) LMH fluid layers with different initial layer thicknesses are generated to study the wave patterns and interface motions. A general 1-D theory is established to describe the motions of the shock/rarefaction waves reverberating inside the fluid layer and the displacements of the two interfaces. Six quasi-2-D LMH fluid layers with diverse initial layer-thickness and amplitude combinations are created to explore the hydrodynamic instabilities of the two interfaces. It is found that the interface coupling significantly influences the interface evolution, even resulting in an abnormal phase reversal of a shocked fast/slow interface if the two interfaces are anti-phase and the initial layer is very thin. The specific conditions for the abnormal phase reversal and the instability freeze out are deduced. Moreover, the additional RMI (or Rayleigh–Taylor stabilisation) imposed by the shock (or rarefaction waves) reverberating inside an LMH fluid layer on the first (or second) interface is quantified. It is proved that the reverberating waves inside an LMH fluid layer stabilise the two interfaces. Finally, a nonlinear model is obtained by incorporating the nonlinearity effect into the linear model, which well describes the perturbation growths of the two interfaces in a later regime.