The Journal of Economic History experienced 2003/04 as a year of transitions. Knick Harley left Western Ontario and joined the economics department and St. Antony's College at University of Oxford. In the process he had to relinquish the valuable services of assistant editor Andrew Ross and lean on his better half, Ann Harley, to hold things together while he was in transit. His new assistant, Natalia Mora-Sitja has since ably assumed the role and handled the details of moving offices and straightening out phone lines. Meanwhile, Gavin Wright was passing the North American baton to Jeremy Atack at Vanderbilt. Wright extends heartfelt appreciation to Scott Wilson for his dedication and professionalism through his years as assistant editor. Atack has decided to forego hiring an assistant editor for the present. He is handling papers and all the administrative details involved in recruiting and following up with referees, but has handed off the book reviews to his newly conscripted editorial associate Bill Collins. Following this lead, Harley has tapped Paul Hohenberg to handle the book reviews on the international side.

The accompanying figure and tables show a 29 percent increase in the number of submissions from 101 in 2002/03 to 130 in 2003/04. The international office processed 53 percent and the North American office 47 percent, showing that the restoration of balance between the offices begun last year is continuing. Papers submitted continue to vary widely by region, topic, and era.

The transitions and increased workload over the past year contributed to a lengthening of the mean and median turnaround times for new submissions, adding 15 and 12 days respectively. The JEH remains very selective; with a higher percentage of papers being rejected, 61 percent versus 41 percent of last year's submissions. 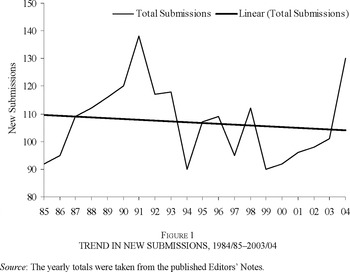 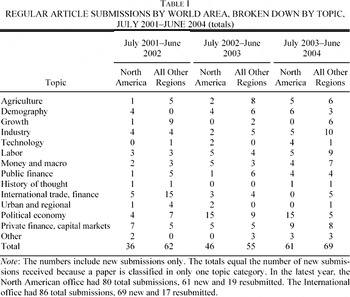 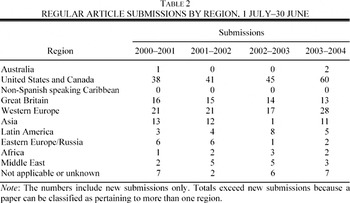 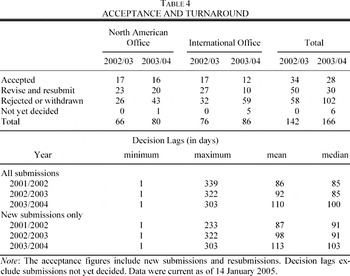 One constant in the life of the JEH is the outstanding quality and commitment of its referees, particularly those serving on the editorial board. The editors are indebted to them for their dedication to the peer review process that results in both well informed editorial decisions and, in quite a few cases, published articles that are markedly improved from their original versions. The editors especially wish to thank outgoing board members Richard Grossman, Peter Coclanis, Alex Field, and Anne McCants. We welcome those added this year: Bob Allen, William Collins, Dora Costa, Larry Epstein, Larry Neal, Steve Quinn, Joachim Voth, Paul Rhode, and Susan Wolcott.