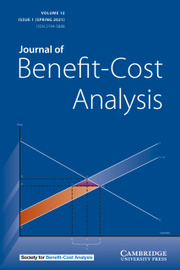 Symposium: Papers from the 2019 European Meeting of the Society for Benefit-Cost Analysis