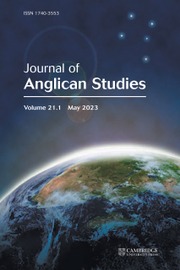 This article pursues the question of whether William Paley's Natural Theology is an Anglican classic. I place Paley's natural theology project in its historical context of skepticism about Christianity's truth claims and in the context of Paley's ‘system’. His teleological argument is briefly explained and four challenges, past and present, to its thesis are considered. The question of what makes a work a classic is explored in terms of its enduring interest, especially in the light of the controversy concerning Intelligent Design Theory, and its enduring value. It is argued that because of its enduring interest and value Paley's Natural Theology may be judged a classic but not of a peculiarly Anglican kind.

2. Clarke, , Paley, p. 129Google Scholar, explains that ‘Little-go’ was the popular name for the examination that all undergraduates took in their second year.

5. Paley, William, Natural Theology: Evidence of the Existence and Attributes of the Deity, Collected from the Appearances of Nature (Oxford: Oxford University Press, 2006)Google Scholar. Although a reprint, the volume does have two editors: Matthew D. Eddy and David M. Knight.

7. Paxton, J. (ed.), The Works of William Paley (5 vols.; London: T. Tegg, 1845), II, p. 310Google Scholar. This unlikely place — a discussion entitled ‘Reverencing the Deity’ — contains the best summary of Paley's perception of the challenges facing the Christian apologist by infidelity and free-thinking in the second half of the eighteenth century.

13. For a defense of this reading of Paley, see my, ‘Ethics and Eschatology — Paley's System Reconsidered’, The Reformed Theological Review, XLVII.2 (1988), pp. 33–43.Google Scholar

17. The substance of this paragraph is taken from Paxton, , Works, IV, pp. 2–5.Google Scholar

18. His later extended discussion of the problem of evil is further evidence of Paley's awareness that not all the appearances of nature clearly favoured his position and of the limitations of his argument, Paxton, , Works, IV, pp. 323–37Google Scholar, ‘Of the origins of evil, no universal solution has been discovered; I mean, no solution which reaches all cases of complaint’, p. 323.

19. Paley became ill in 1800 and suffered considerable ill health during the writing of the Natural Theology and finally succumbed to the complaint in 1805, LeMahieu, , Mind, p. 28Google Scholar. He knew the problem of pain personally.

21. Eddy, , ‘Rhetoric and Science’Google Scholar, convincingly argues that Paley was intentionally seeking to ‘play on the heart-strings of empirically minded readers’, p. 1.

45. McGrath, , Dawkins' God, p. 65Google Scholar. This is extreme overstatement and anachronism. For a more balanced view of how Paley was typical of his era in his use of earlier sources, see Eddy, , ‘Rhetoric and Science’, p. 14Google Scholar. Also see Paxton, , Works, IV, p. 226Google Scholar, where Paley explicitly shows his indebtedness to Ray.

51. McGrath's harshness is excessive. He fails to appreciate the nature of Paley's systematic effort over his four main works. Paley was aware that the appeal to Christian evidences begged a question of God's existence and he did his best to meet the objection in his Natural Theology. This is hardly ‘adventurism’. I applaud Paley in this insight although, like McGrath does, I find Paley's own natural theology leaves me decidedly cold.

54. For example, Paley, William and Paley, Edmund, The Works of William Paley: With Additional Sermons, and a Corrected Account of the Life and Writings of the Author (Bristol: Thoemmes, 1998).Google Scholar

57. Even so, despite the claims of its supporters, on my reading of the controversy Intelligent Design seems more like a philosophical theory than a strictly scientific one, metaphysical rather than physical.

72. Halverson, , Concise Introduction to Philosophy, p. 166.Google Scholar Does the Pauline use of the vaguer theiotés in Rom. 1.20 rather than the theotés of Col. 2:9 support Halverson's point?

75. Heidegger, Martin, An Introduction to Metaphysics (trans. Manheim, Ralph; New Haven: Yale University Press, 1964), p. 1.Google Scholar As an anonymous reviewer of this article pointed out, Heidegger was following Leibniz in this.

76. The distinction between the two questions and the different natural theology arguments that arise from it is well stated by Case-Winters, ‘The Argument from Design’, pp. 69–70.Google Scholar

77. Some recent philosophical proposals suggest that analogy between the universe and works of art is a better way forward than one between mechanisms and the universe. See Garcia, Laura L., ‘Teleological and Design Arguments’, in Quinn, Philip L. and Taliaferro, Charles (eds.), A Companion to Philosophy of Religion (Malden, MA: Blackwell Publishers, 2000), p. 339.Google Scholar

79. For an anthology, as an example see Kessler, , Voices, pp. 322–27Google Scholar and for an introductory text on the philosophy of religion, as an example see Peterson, Michael, Hasker, William, Reichenbach, Bruce and Basinger, David, Reasons and Religious Belief: An Introduction to the Philosophy of Religion (New York: Oxford University Press, 2nd edn, 1998), pp. 100–102Google Scholar in a section titled, ‘The Analogical Teleological Argument’.