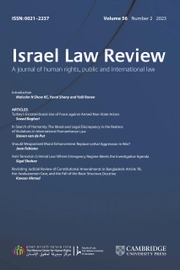 Legal Entitlements, Changing Circumstances and Intertemporality: A Comment on the Creation of Israel and the Status of Palestine

The events surrounding the establishment of the State of Israel in 1948 and the ensuing Palestinian naqba (disaster) have generated an abundance of legal literature. It is beyond the ambitions of this article to revisit all or most of the existing literature, or to strive and comprehensively discuss the various legal propositions they consider. Instead, it offers a critical assessment of some of the legal conclusions offered by one of the most influential experts in the field – Professor James Crawford – who, in the second edition of his seminal treatise The Creation of States in International Law, discusses at some length the events surrounding the creation of Israel and the status of Palestine. Section 2 of the article offers some general observations on the continued relevance of the events surrounding the creation of Israel. In particular, it raises the question of the relationship between the principles of ex injuria non oritur jus and ex factis oritur jus in the Israeli–Palestinian context. Section 3 examines the legal significance of the 1922 League of Nations Mandate and Crawford's position concerning its validity. Sections 4 and 5 adopt a similar examination with regard to two other historic events of potential legal significance, namely the 1947 UN General Assembly Resolution 181 (the Partition Resolution) and Israel's 1948 Declaration of Independence. Section 5 also briefly examines Crawford's conclusions relating to the status of Palestine, and Section 6 concludes.

2 Crawford, James, The Creation of States in International Law (2nd edn, Oxford University Press 2006) 421–48Google Scholar. The discussion of the events surrounding the creation of Israel was omitted from the first edition of the book, published in 1979.

4 The Island of Palmas (United States/Netherlands) (1928) 2 RIAA 829, 845 (‘As regards the question which of different legal systems prevailing at successive periods is to be applied in a particular case (the so-called intertemporal law), a distinction must be made between the creation of rights and the existence of rights. The same principle which subjects the act creative of a right to the law in force at the time the right arises, demands that the existence of the right, in other words its continued manifestation, shall follow the conditions required by the evolution of law’). For criticism, see Jessup, Philip C, ‘The Palmas Island Arbitration’ (1928) 22 American Journal of International Law 735CrossRefGoogle Scholar.

5 As of the nineteenth century, only discovery coupled with effective control could confer valid title: Island of Palmas, ibid 846.

11 The full text of the Balfour Declaration (named after Lord Arthur Balfour, the British Foreign Secretary) is as follows: ‘His Majesty's Government view with favour the establishment in Palestine of a national home for the Jewish people, and will use their best endeavours to facilitate the achievement of this object, it being clearly understood that nothing shall be done which may prejudice the civil and religious rights of existing non-Jewish communities in Palestine, or the rights and political status enjoyed by Jews in any other country’.

13 eg, Milton-Edwards, Beverley, The Israeli-Palestinian Conflict: A People's War (Routledge 2009) 36Google Scholar; Manna, Adel and Golani, Motti, Two Sides of the Coin: Independence and Nakba 1948 (Republic of Letters 2011) 32Google Scholar. For information on the various accounts of the size of the population groups in Palestine before and after 1922, see http://www.mideastweb.org/palpop.htm.

18 For a discussion of the power of international organisations to dispose of territories, see Crawford (n 2) 246–49.

19 Covenant of the League of Nations (n 17) (‘To those colonies and territories which as a consequence of the late war have ceased to be under the sovereignty of the States which formerly governed them and which are inhabited by peoples not yet able to stand by themselves under the strenuous conditions of the modern world, there should be applied the principle that the well-being and development of such peoples form a sacred trust of civilisation and that securities for the performance of this trust should be embodied in this Covenant … Certain communities formerly belonging to the Turkish Empire have reached a stage of development where their existence as independent nations can be provisionally recognized subject to the rendering of administrative advice and assistance by a Mandatory until such time as they are able to stand alone. The wishes of these communities must be a principal consideration in the selection of the Mandatory’).

28 For the view that the UN Charter and the League of Nations Covenant are constitutional instruments, see Fassbender, Bardo, ‘The United Nations Charter as Constitution of the International Community’ (1998) 36 Columbia Journal of Transnational Law 529Google Scholar.

30 Note that a subsequent challenge to the legality of the Palestine Mandate was rejected by the Council in 1924: Allain (n 1) 87.

31 Charter of the United Nations and Statute of the International Court of Justice (entered into force 24 October 1945) 1 UNTS XVI (UN Charter), art 80 (‘… nothing in this Chapter shall be construed in or of itself to alter in any manner the rights whatsoever of any states or any peoples or the terms of existing international instruments to which Members of the United Nations may respectively be parties’); Feinberg (1970) (n 1) 40; but see a narrower reading of art 80 in Simma (n 29) 1120–21.

33 Memorandum by Lord Balfour, British Government, Public Records Office, Foreign Office No. 371/4183, 1919, cited in Cassese (n 20) 233 (‘Palestine present[s] a unique situation. We are dealing not with the wishes of an existing community but are consciously seeking to reconstitute a new community and definitely building for a numerical majority in the future’).

35 eg, Rosalyn Higgins, The Development of International Law through the Political Organs of the United Nations (Oxford University Press 1963) 104.

38 eg, the decision to reject claims for Ukrainian independence, and to accept many of the territorial claims of Serbia and Romania, who fought on the side of the victorious allies: MacMillan, Margaret, Paris 1919: Six Months that Changed the World (Random House Trade Paperback 2001) 226, 261, 361–62Google Scholar.

41 Winston Churchill, ‘Zionism versus Bolshevism: A Struggle for the Soul of the Jewish People’, Illustrated Sunday Herald, 8 February 1920, 5.

43 eg, Wilson, Jerome, ‘Ethnic Groups and the Right to Self-Determination’ (1996) 11 Connecticut Journal of International Law 433Google Scholar, 458 (‘Wilson's aim in propagating the right of self-determination was to secure peace in Europe by preserving (and creating, out of the defeated German, Austro-Hungarian and Ottoman empires) a system of ethnically homogeneous nation states’); Feinberg (1970) (n 1) 42–43; Anghie, Antony, ‘Colonialism and the Birth of International Institutions: Sovereignty, Economy, and the Mandate System of the League of Nations’ (2002) 34 New York University Journal of International Law and Politics 513, 561–62Google Scholar.

44 eg, Levene, Mark, ‘Nationalism and Its Alternatives in the International Arena: The Jewish Question at Paris, 1919’ (1993) 28 Journal of Contemporary History 511CrossRefGoogle Scholar.

50 Memorandum from the Emir Feisal, presented to the Council of Ten at the Peace Conference on 6 February 1919, http://www.ctevans.net/Versailles/Diplomats/Lawrence/Appendices.html. For a discussion, see Feinberg (1936) (n 1) 35–45 (noting also the agreement to Jewish immigration to Palestine of the Syrian delegate to the Conference, Chekri Ganem).

51 For a comparable contemporary debate about the advantages and disadvantages of the economic development associated with British colonialism for local populations, see Lange, Matthew, Lineages of Despotism and State Power: British Colonialism and State Power (University of Chicago Press 2009) 1–2 CrossRefGoogle Scholar.

64 For a discussion of the operation of the desuetude rule, see Glennon, Michael J, ‘How International Rules Die’ (2005) 93 Georgetown Law Journal 939, 960Google Scholar.

65 As is well known, the political representatives of the Arab group in Palestine rejected the Resolution and Arab states invaded Palestine following the termination of the Palestine Mandate on 15 May 1948 in order to prevent its implementation: see, eg, Abdel Monem Said Aly, Feldman, Shai and Shikaki, Khalil, Arabs and Israelis: Conflict and Peacemaking in the Middle East (Palgrave Macmillan 2013) 51Google Scholar. Subsequently, the State of Israel also rejected the Partition Resolution as ‘null and void’: David Ben Gurion, ‘Statement before the Knesset’, 3 December 1949 (‘[W]e can no longer regard the UN Resolution of 29th November as having any moral force. After the UN failed to implement is [sic] own resolution, we regard the resolution of the 29th November concerning Jerusalem to be null and void’).

73 ibid 434. This is notwithstanding the famous provision incorporated in the Armistice Agreement between Israel and the Jordan which specified that ‘[t]he Armistice Demarcation Lines defined in articles V and VI of this Agreement are agreed upon by the Parties without prejudice to future territorial settlements or boundary lines or to claims of either Party relating thereto’: Hashemite Jordan Kingdom-Israel, General Armistice Agreement (with annexes) (entered into force 3 April 1949) 42 UNTS 303, art VI(9). See also Egypt-Israel, General Armistice Agreement (with annexes and accompanying letters) (entered into force 24 February 1949) 42 UNTS 251, art V(2) (‘Demarcation Line is not to be construed in any sense as a political or territorial boundary, and is delineated without prejudice to rights, claims and positions of either Party to the Armistice as regards ultimate settlement of the Palestine question’).

77 For the general conditions of statehood under international law, see the Convention on Rights and Duties of States adopted by the Seventh International Conference of American States (entered into force 26 December 1933) 165 LNTS 3802, art 1. The failure of Palestine to meet the objective conditions of statehood had been cured by General Assembly Resolution 43/177, as the Assembly did not have powers to bring new states into being: UNGA Res 43/177 (15 December 1988), ‘Question of Palestine’, UN Doc A/RES/43/177.

Legal Entitlements, Changing Circumstances and Intertemporality: A Comment on the Creation of Israel and the Status of Palestine
×

Legal Entitlements, Changing Circumstances and Intertemporality: A Comment on the Creation of Israel and the Status of Palestine
×

Legal Entitlements, Changing Circumstances and Intertemporality: A Comment on the Creation of Israel and the Status of Palestine
×
×