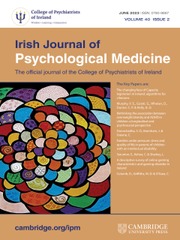 Objectives: To examine the relationship between cognitive deficits, the duration of untreated psychosis (DUP) and positive and negative symptoms in a first episode psychosis sample.

Method: We assessed a consecutive sample of first episode psychosis participants from a catchment area service with a comprehensive neuropsychology battery, a family and service-user based measure of DUP and measures of symptomatology.

Results: Using correlations and stepwise linear regressions, we found strong relationships between measures of DUP and positive symptomatology. We found that positive and negative symptoms were associated with different time periods within DUP. However, we did not find evidence of a relationship between DUP and cognitive factors.