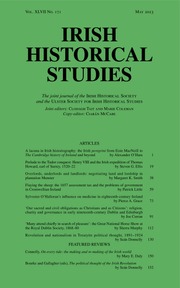 XXIX the justiciar and the murder of the MacMurroughs in 12821

When the Irish chieftains sent their ‘Remonstrance’ to Pope John XXII at the time of the Bruce invasion, they included among their indictments of English rule in Ireland the murder of Murchertach MacMurrough, the Irish king of Leinster, and of Art, his brother. The killer they named as ‘Geoffrey de Pencoyt’. This was evidently an event of some moment, to be classed with the more famous murder of Brian Rua O’Brien by Thomas de Clare in 1277 and the slaughter of the O’Conors of Offaly by Peter de Bermingham in 1305. Yet beyond the fact that the murder took place at Arklow on 21 July 1282, very little is known about it. The documents printed below shed new light on the event, suggesting strongly that it was politically motivated and inspired by the Isish justiciar, Stephen Fulbourne. They also furnish tlie crucial missing links between facts that have long been known, but which have not hitherto made coherent sense.

The introduction to the documents is partly based on a paper read to the Dublin Historical Association on 21 November 1968.

page no 224 note 10 Orpen’s statement that Murchertach went (Normans, iv, 20) is based on a misapprehension. See note 14, below.

page no 225 note 12 This might suggest that he had gone to England, but it could equally well refer to a journey within Ireland, perhaps to Dublin Castle.

page no 226 note 22 The surname is illegible, but the context and coincidence of Christian names point strongly to Pencoyt. Even were, this not so, the complaint still implicates Fulbourne in (the planning of the deed.

page no 227 note 24 Bibliothèque de Troyes, MS ι, 316, f. 43. The ‘Geoffrey’ of the ‘Remonstrance’ may merely be one of tine small slips in this document (cf note 2, above). On the other hand, document III speaks of Henry ‘and his brother’, and this could be the otherwise unknown ‘Geoffrey’

page no 229 note 1 Contractions have been silently expanded, but italic type indicates extension of proper names represented by initial only in MS; punctuation and capitalization have been modernized; figures have been altered from Roman to Arabic numerals. I am grateful to Mr Ρ Mussett of the Department of Palaeography, Durham University, for reading through the Latin texts and suggesting some useful emendations.

page no 230 note 5 P.R.O., Exchequer Accounts Various, E. 101/234/20. This document is faded, and in one or two places totally illegible. I have used square brackets to indicate blanks or doubtful readings.

XXIX the justiciar and the murder of the MacMurroughs in 12821
×

XXIX the justiciar and the murder of the MacMurroughs in 12821
×

XXIX the justiciar and the murder of the MacMurroughs in 12821
×
×